I've been tagged by Dana over at Sweeping Through Life. This is my second time being tagged and I am just stoked! Here are the rules:

Today is Drew's 30th birthday. Of course, I couldn't let a big occasion like this go by without some sort of fanfare. So, I have been busy plotting planning a surprise party.

Drew has been working some crazy, insane hours. I planned for some of his friends to take him to the casino. He spent the afternoon gambling and, thanks to his friends, arrived back here right on time.

What a nice way to say thanks right? He just walks right away and into the kitchen. 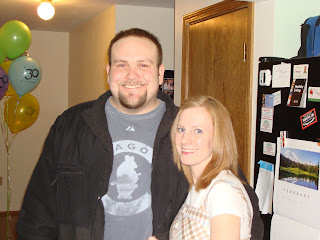 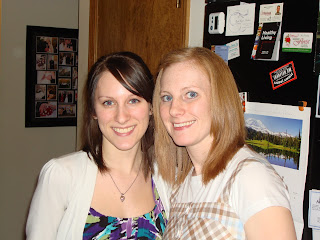 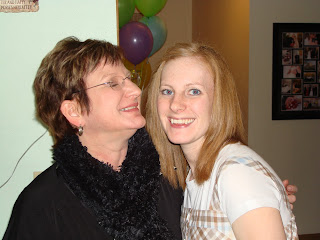 The cake that Becca and I made. 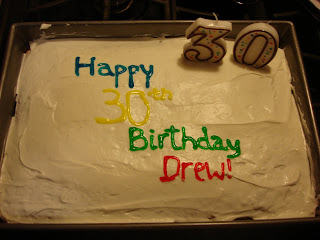 The cake that Josh and Angie brought. I think it wins! 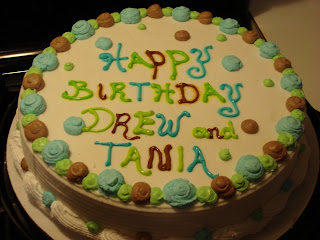 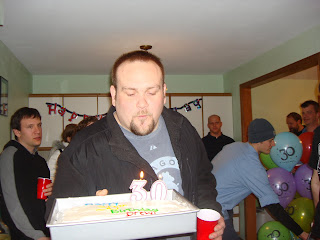 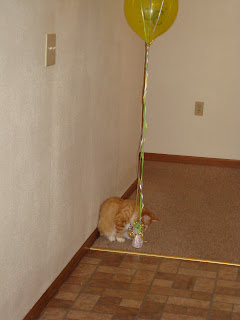 Well, now I have a hubby in his 30s. I know that he's felt a little down in dumps about it. Hopefully 30 will treat him well. And I would never rub it in or anything :)!
1 comment:

Making the bed is always a bit of a PITA when Leo is around. He loves to jump in underneath the covers and run around messing them up. Sometimes, he doesn't even need the covers to play with.

Isn't he just adorable? I love him even if he is a nuisance sometimes.

On Thursday, I dropped him off at the vet so that he could get neutered and declawed. Boy, has he been chill since then. I'm sure that part of it is because he's still in a little bit of pain. He's done very well and was playing when I brought him home on Friday.

A Place To Rest Our Heads Part II

Our new bed arrived today. And in case anybody is wondering just how big that bed is, it comes up to my belly button. 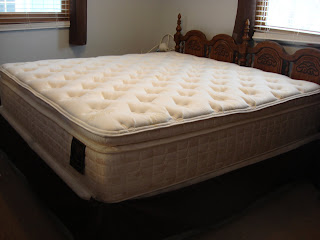 I practically have to run and jump to get onto the darn thing.

And, just in case anybody is curious over which bed we got: 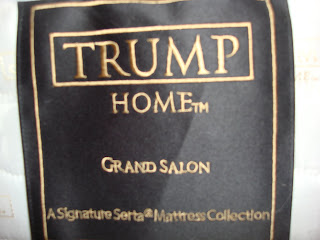 The Arc is an organization that serves adults and children with development disabilities here in our community. They have some fundraisers every year and a relatively new one is the Chocoholic Frolic. I received a flyer for it back in September of last year. I mentioned it to my aunt, who is a self-confessed chocoholic because I knew that she would love to go. I had sort of forgotten about it, but my aunt certainly had not. She mentioned it to my mom, who mentioned it to me, and we all decided to make a girls night of it. And, I mean, what woman can turn down chocolate? 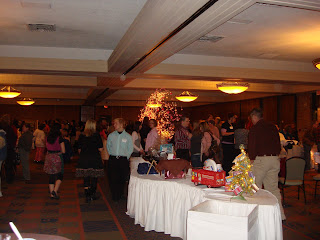 The room was set up similar to what it would be like for a bridal expo. There were tables set up and each one had a different chocolate something. Brownies, cake, cookies, martinis, mousse, chocolate chili, and of course, a chocolate fountain. 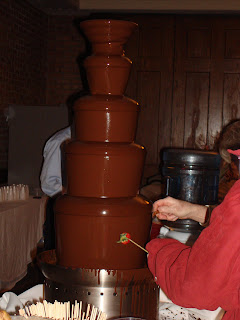 It was chocolate lovers dream come true! Could this sign be any more true? 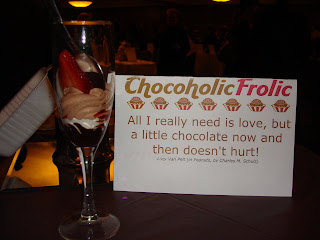 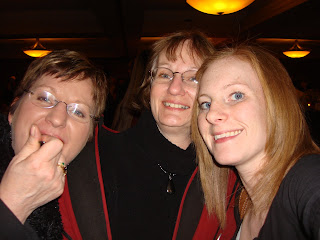 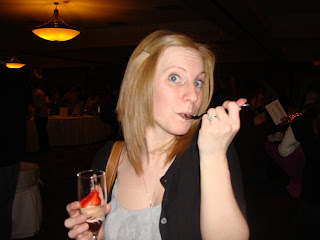 Is it bad that I'm already drooling for next year?
No comments:

While reading through my Google Reader tonight, I came across a color quiz that Young House Love had posted. And I decided to give it a try. Basically, you pick colors that you feel are most pleasing to look at. Here's my results:

Best Occupational Category
You're an ORGANIZER

ORGANIZER WORKPLACES
Your very careful, conscientious, conservative nature gives others the confidence to trust you with handling money and material possessions. Structured organizations that have well-ordered chains of command work best for you.

What do you think? If you know me at all, you know that that is pretty spot on.

A Place To Rest Our Heads

When Drew and I moved in together, we were first sleeping on my full sized bed. We quickly realized that that was not going to work for very long. Drew's parents bought a new bed and were kind enough to give us their old bed. We have been so grateful to have a king bed to sleep on. The only bad thing is that their mattress is more than 30 years old. That's old for a mattress! Drew has been complaining non-stop about how uncomfortable the bed is. And I'd be lying if I didn't agree.

Drew did some contracting work in January and I agreed that with the money he made we could buy a new mattress. We shopped around at the local stores here and Drew decided that he liked a Trump Home mattress from Serta.

I didn't have too many opinions on the mattresses. As long as it wasn't a memory foam and it was plush. Have you laid on a memory foam mattress? Absolutely horrible! Your body sinks into this hole as the foam forms around you. Then, when you want to roll over and change positions, you have to hoist yourself out of said hole and create a whole new hole. Can you imagine me doing that when I'm hugely pregnant? I shudder to think the size of the hole that I would create. Horrible!!

So, Drew purchased the new mattress on Thursday and we will be receiving it a week from today.

25 just seems like such a good age. A quarter of a century. Mid-twenties.

Today was my birthday and Drew and I spent the entire day together. I was woken up by Drew's parents calling me and singing "Happy Birthday". I love my in-laws! After I hung up with them, I looked at my phone and realized that I had a text message. When I read it, I squealed! Rachel had texted me to let me know that she was in the hospital getting ready to have baby Jack!!! On my birthday!!! I was ecstatic!

I got out of bed and Drew and I had birthday cake for breakfast. Becca was so sweet and baked me a spice cake and made me a sweet card. Thanks Becca!

Then, we got ready and went out and ran errands. We ended up going to Granite City for dinner. We had a great dinner, then came home and just chilled the rest of the night. 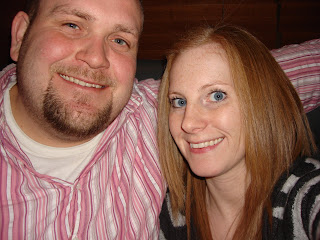 A First for Us

Drew and I started dating in September of 2006. So, we've been together for about 3 1/2 years. Now, there's a bunch of things that we've never done together, but one of them is not exactly expected since it's a very common thing to do when two people are dating.

Drew and I have never been to the movie theater together.

But that changed tonight when Drew took me to see Dear John for my birthday. 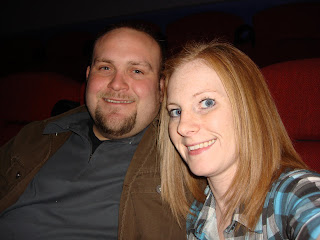 How was the movie you ask? Shirtless Channing Tatum was fantastic. The movie was just ok. I find it hard to justify spending the amount of money that it costs to go see a movie, especially when some movies turn out to be horrible. I guess I just expected more out of this movie. It was still good, just not worth spending the money to see it in the theaters. But, Drew did comment later that he also agreed that Channing is hot. That made my day!!
After the movie, we went and played cards at Adam and Nicole's with them and Josh and Amanda. I love spending time with our friends.
1 comment:

He lacked the finer element of conscience which looks upon Art as a sacred calling, she remembered, and because of "pecuniary necessities" he "scattered his forces in many different and unworthy directions."
-- James F. O'Gorman, Accomplished in All Departments of Art

The young man of the house was absorbed in his vegetable garden and the possibilities for pecuniary profit that it held.
-- Samuel Chamberlain, Clementine in the Kitchen

He sees the great pecuniary rewards and how they are gained, and naturally is moved by an impulse to obtain the same for himself.
-- David J. Brewer, "The Ideal Lawyer", The Atlantic, November 1906

Over the decades, Pitt built an impressive roster of similarly well-heeled clients who stood accused by the SEC of securities fraud, misstating their finances, other pecuniary offenses.
-- Jonathan Chait, "Invested Interest", The New Republic, December 17, 2001
No comments: