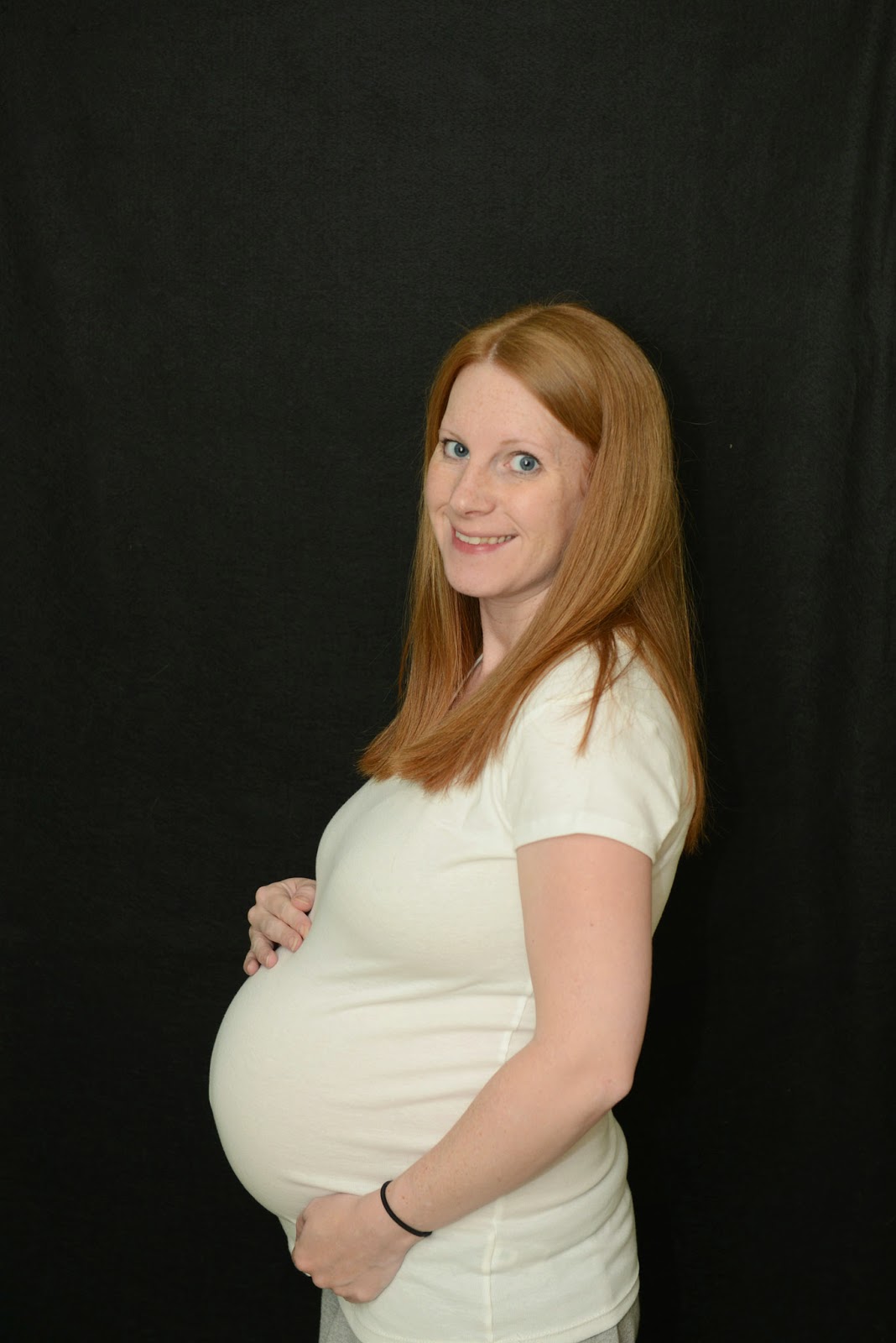 Basically, I'm huge!  And, I still have 8ish more weeks of growing to do!  A lot has happened in the four weeks since I've last done an update.

First, I failed the one hour glucose test.  I was not a very happy pregnant lady.  I failed it by a lot too, around 30 points.  I went the following week to take the three hour test and was pretty optimistic going into it.  I drank the drink through a straw, which helped, A LOT!  Good news?  I didn't feel pukey at all!  Bad news?  I failed the three hour test too.  So now I have gestational diabetes and scheduled an appointment with the diabetes care center.  The hope was that I could control the diabetes with a diet plan.  I met with them, received a glucose meter and was given instructions to test my sugars four times a day, when I first wake up, an hour after breakfast, an hour after lunch, and an hour after dinner.  It was quickly apparent that my morning numbers are the ones that are causing all the trouble.  In the three or so weeks that I've been doing this, I've only had one fasting number that has been where it is supposed to be.  I had another OB appointment and meeting the diabetes center today and I've been put on insulin.  I take five units of NPH insulin at night before bed.  Hopefully, this will be the answer to get my blood sugars where they need to be.

At my appointment today, I also had a growth scan.  Little boy was head down and I hope that he stays that way!  Also, he's huge!  He measured in at 4 lb 10 oz.  I know that the measurements can be a little off, but that's pretty large at this point.  I think the tech said that was in the 70th percentile.  I also had a little extra fluid.  When I met with my OB, he's a little concerned that I won't be able to have him vaginally.  Doc knows how much I really don't want a c-section, so we're going to be watching his growth.  I also measured at 36 cm today.  And I feel like it!  The bump is huge and my skin is starting to feel very stretched.

My OB wants to do weekly NSTs now because of the gestational diabetes.  Every Thursday, I'll be at his office doing the boring non-stress test.

Oddly enough, my weight has stayed about the same for the past couple of weeks.  I'm hanging right around the 30 lb mark.  My feet hurt if I'm on them for a long time, and I've developed some cankles that I noticed while we were in Florida.  They've been better since we've been back.  Occasionally, I'll get a little heartburn, which will usually go away on its own.  Very rarely do I have to take anything.

Drew and I set up his crib and dresser yesterday.  I bought the fabric to make some decorations for his room, but now I have to sew it.  We're going to be working very hard over the next couple of weeks to get things finished up.  I need to order the crib skirt and some fabric guard rails, and purchase some sheets.  I'd like to get things finished up by the beginning part of June in case he decides to make an early appearance.  And also because the bigger I get, the less I'll feel like doing things.

This kid moves constantly!  It's very reassuring to feel him move as much as I do.  However, I'm a little worried that his lack of sleep in utero is going to mean a lack of sleep once he's an outside baby.  Since he's getting bigger, his movements are starting to hurt.  I find myself wincing often when he moves around.
No comments: