I had to run into the grocery store for a couple of items.  Our local chain store has new little carts for young kids to push.  I've seen them for a couple months now, and every time I think that it would be fun to let Annelise push one.  That day finally came!
I carried her into the store and showed her the little cart.  I put her down, pulled one out, and showed her how to push it. She had a little trouble at first, but now I think it was because the cart pulled to the right.  She quickly got the hang of it and had a blast.
Our first stop was bread.  I selected a loaf, put it in the cart, and then started her walking down the main front aisle.  Everyone kept ohhhhing and ahhhhing over how cute she looked pushing the cart.  I turned her down an aisle so that we could make our way to the back of the store for some milk.  Some random guy thought she looked so cute that he took her picture.  Kinda creepy.
We made it to the back of the store and started walking down the back aisle.  We passed a display that had some Frosted Flakes on it.  She must have recognized it, because she quickly stopped the cart, grabbed a box, and put it in the cart!  She totally helped herself!  I laughed so hard.  After the cereal, we grabbed some milk, and made our way to the front of the store. 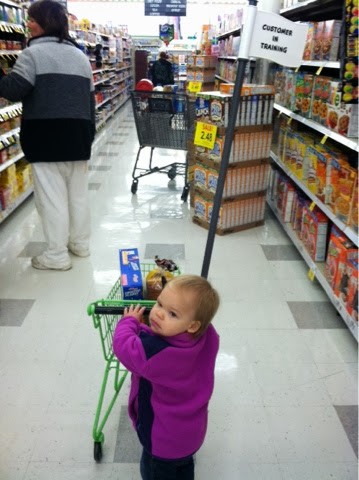 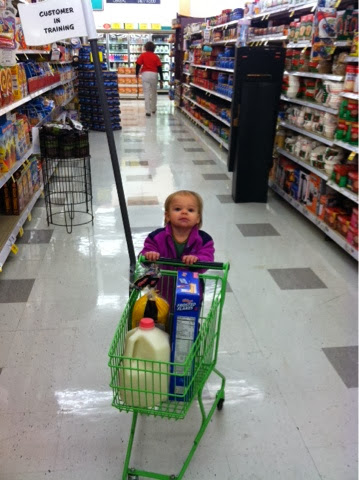 She was pretty upset when we had to stop pushing the cart and wait in line, but she calmed down fairly quickly as I talked her through the checkout process.  She did a great job putting the cart away and walking out to the car.
I love these little moments as she's getting older.  I really do treasure them.
1 comment:

I searched for a long time for a costume that I thought would be perfect for Annelise this year.  I knew that we were going to take her Trick-or-Treating, and I also knew that it would likely be pretty cold.  So, I wanted something that would be fairly warm so that she wouldn't have to wear a coat and cover it up.  I finally landed on a monster costume.  She also loves to growl and I had trained her that every time I ask, "Annelise, are you a monster?" to raise her arms and growl. 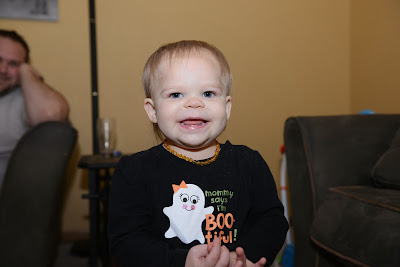 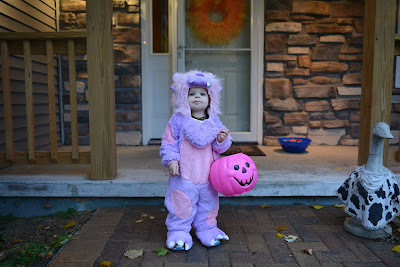 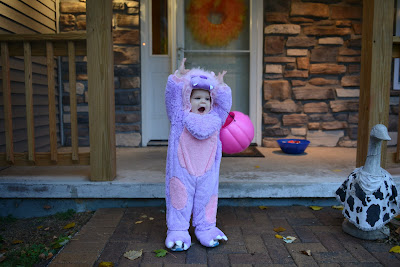 After I took a couple of pictures outside, we started off walking to go TorT at a few houses on our street.  Our plan was to just do our street and then come back and hand out candy.  Our neighbors across the street, two little girls and their dad, were coming outside at the same time we were.  All the girls went to our neighbor's house together, and then we just decided to keep TorT with them.  There were also two other little girls that were friends with one of the neighbor girls.  Drew grabbed Annelise's wagon, which I was surprised that she happily went in, and we went house to house.  One of the neighbor girls also rode with Annelise.

I was really surprised at how much fun she had.  I think that it helped that she was with some other kids with us.  We would pull her up to the driveway, stop and get her out of the wagon, and she would run up to the door and patiently wait.  She didn't say "trick or treat", but she did babble something sometimes.  She didn't really even say "thank you", even though I coaxed it, but she did eagerly say "bye-bye" as she walked away.  Then, she'd run back to the wagon, get loaded in, and ride to the next house.

I was shocked that we actually stayed out the whole two hours!  She had so much fun, and honestly, I had a blast too!  It was so much fun to take her out to do something like that.  I love being able to do fun kid stuff with her now that she's getting older.