It turns out that he and thousands of other German immigrants have been acting as pre-invasion intelligence-gatherers, ensuring that "the German Army knew almost to a bale of hay what provender lay between London and the coast."
-- Niall Ferguson, The Pity of War

Frances Trollope, Captain Marryat, Colonel Basil Hall and Charles Dickens in 1842 all commented on the way Americans wolfed down their provender as fast as possible, cramming the cornbread in their sloppy maws and, worse, doing so in grim silence, punctuated only by noise of slurps, grunts; scraping knives and hacking coughs.
-- Simon Schama, "Them and US", The Guardian, March 29, 2003
No comments:

If you remember here, I told you that I had a lot going on, but I couldn't reveal anything just yet. Well, the time has come. I can spill the beans.

As you probably know, I've worked at a bank since July 2007. I have never really enjoyed my job there. I enjoyed the work, but I, in no way, enjoyed the sales aspect of it. Hated it actually! Guess what? I got a new job. I was offered the position in September and have just been working both jobs since they are both part time.

I worked my last day at the bank yesterday. It's sad to leave, but good to move on. I was promised to go full time in December at the new job. But have recently found out that it may not happen until January now. But we knew that, right? Companies always make promises and very rarely follow through. Oh, what I wouldn't give to work for a company that actually said what they meant and meant what they said.
No comments:

It is a fiercely argued exegesis of Shakespeare's plays in the tradition of Samuel Johnson, Hazlitt and A. C. Bradley, a study that is as passionate as it is erudite.
-- Michiko Kakutani, "Vast Shakespearean Drama With All People as Players", New York Times, October 27, 1998

These are tightly argued, crisp exercises in literary and cultural exegesis which make perfectly clear the brilliant patterns of language and oftentimes strained analogic thinking of the poets.
-- review of Made in America, by Lisa M. Steinman, in the Journal of Modern Literature

No variety of love is too trivial for exegesis. No aspect of love is so ridiculous that it hasn't been exhaustively reviewed by the great thinkers, the great artists, and the great hosts of daytime talk shows.
-- P. J. O'Rourke, Eat the Rich

Their works are the subject of innumerable analyses, exegeses, seminars, and doctoral theses.
-- Alan Sokal and Jean Bricmont, Fashionable Nonsense
No comments:

Could It Really Be Over?

Last Thursday, November 5, Drew and I went back to the doctor for a follow up appointment after my surgery. I don't think that I had ever been so excited to go to the doctor. I never got the opportunity to talk to her after the surgery, so I was anxious to hear things from her and to be able to ask some of the questions that I had been having.

Dr. H showed me the pictures that she took during the surgery. Boy, were those interesting! I honestly had no idea what I was looking at, but she went through them and pointed out things to Drew and me. I basically just took her word for it. She showed me the spots where I have endometriosis. She said that I have Stage 4, which is the worse there is. She discussed with me everything that she told Drew and my mom after the surgery. We basically decided that doing continuous birth control to stop my periods would be the best decision for right now. She told me that I had to wait until the Sunday after my next period to start. Dr. H then said that I would probably have one more bad period then.

I am extremely happy to report that I am finishing up my cycle and I was not sick at all. Not even a little bit!!! This is such good news to me. That also means that I'll be taking my first birth control pill tonight.

I'm really nervous about it. The pharmacy tech said that I would probably be nauseous with it, so it would be best to take it at night so that I could sleep through it. I'm just praying that God lays his hand over and protects me. I don't want to feel sick anymore from all this stuff. I just want to feel better, normal.

I want to say a huge thank you to all of my family and friends who have called or written to see how I've been feeling. I can't express to you how much it has meant to me!
No comments:

Forfend / for-FEND / transitive verb
also forefend
1. a. (Archaic) To prohibit; to forbid.
b. To ward off; to prevent; to avert.
2. To defend; to protect; to preserve.

The Tory leader sort of wanted to say that the government should deploy the army more rapidly, but -- heaven forfend -- he didn't want to imply that it was anybody's fault that the soldiers hadn't been deployed!
-- Simon Hoggart, "A greasy whiff dispels the stench of worthiness", Guardian, March 22, 2001

If one of us is missing, heaven forfend, then the king's forces are diminished.
-- Leon Wieseltier, Kaddish

The river of discovery will continue to flow without cessation, deepening our understanding of the world and enhancing our capacity to forfend calamity and live congenial lives.
-- John Maddox, What Remains To Be Discovered
No comments:

And then the inquests, and the coroner's reports, and the hints of diplomatic cover-ups, and skulduggery in high places.
-- Hilary Mantel, Eight Months on Ghazzah Street

Laptop theft was the third most common electonic skulduggery, behind viruses (84 percent) and unauthorized employee use of computers and software (78 percent), according to the survery by the Computer Security Institute in San Francisco.
-- Michael Cooper, "Low Tech Joins the Fights Against High-Tech Theft", New York Times, April 23, 1998

I thought that I should probably recap surgery and let everyone know what happened.

We arrived at the hospital bright and early at 7 AM. We checked in and were given a pager. Drew and I sat and waited for about 10 minutes and then a nurse came and brought us back to hospital "cubicle". It was a 3 walled room with a curtain, a bed, and a bunch of machines. The nurse had me change into one of the stylish operating gowns and then we played the waiting game. 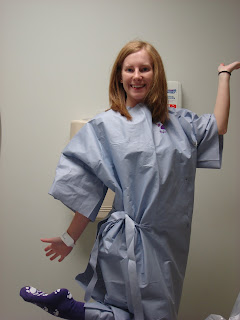 After about an hour, another nurse came in and hooked up my IV. It was my first time ever having an IV. Obviously, it was Drew's first time too! 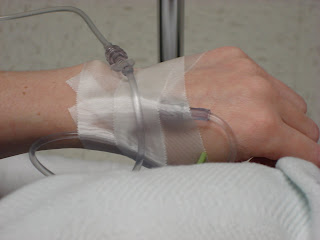 After the IV got hooked up, I had to just lay around and wait. Before that, I was pacing and couldn't sit still. There must have been something in there to calm me down! 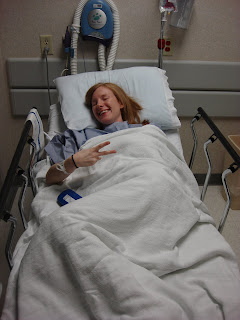