The world has been buzzing about this day since Prince William and Catherine Middleton announced their engagement back in November.  I know that I have been looking forward to it.  I wasn't born yet when Prince Charles married Lady Diana back in 1981, so I was ecstatic to be able to witness such a piece of history this time.

Since I don't have a typical job anymore, I've really gotten myself into a weird sleep pattern.  I usually don't go to bed until 2 or 3 AM and then wake up somewhere between 10 AM and noon.  I know, I'm such a slacker, aren't I?  I got into bed by about 2 AM this morning and was listening to the TV as I played Solitaire on my phone to get myself tired.  I found some Royal Wedding coverage that started at 2:30 AM, so I did what any obsessed person would do; I turned it on.  Even though I had already set the DVR to record the event.  Nothing beats watching it live, right?  Well, as soon as I started watching the coverage, I knew that there was no way that I would be able to shut it off and go to sleep, even though I had a busy day today.  So, I stayed up all night and watched it!

It was so exciting to watch this event happening live.  I am still so in love with everything wedding and would get married again in a heartbeat.  (To the same man, of course!)

There was so much speculation over Kate's dress, and the world was not disappointed. 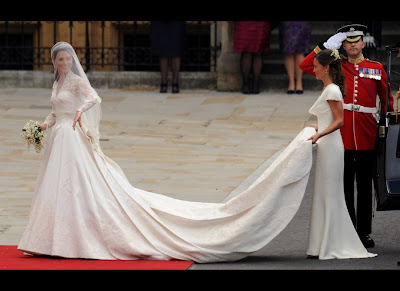 Personally, it wasn't my style.  I loved the lace, and I think she looked absolutely stunning in it.  However, the bra cups ruined it for me.  They looked pointy and awkward to me.  Her veil and tiara were magnificent.

I can only imagine the nerves that she had before making her long walk down the aisle.  And she had such a long walk, I heard someone say that it took her 4 minutes.  Crazy! 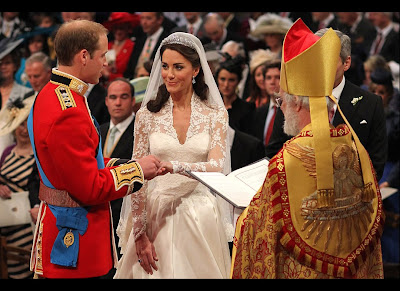 The ceremony lasted about an hour.  Prince William and Kate exchanged vows and he gave her a ring.  After some readings, blessings, and music, they went to a private room to sign the marriage registry.  After that, they exited Westminster Abbey.  No first kiss!!  I'm betting that they snuck a kiss back in the private room.  At least, I would have. 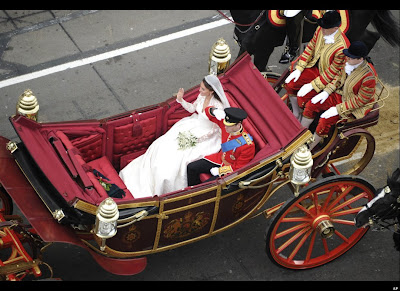 The newlyweds rode in a carriage to Buckingham Palace, where a reception was being hosted by the Queen. 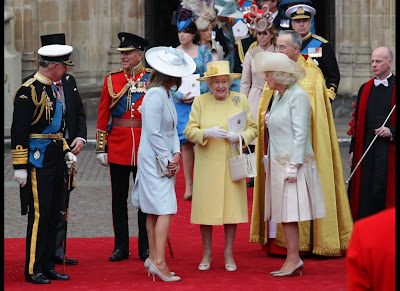 Speaking of the Queen, doesn't she look stunning in yellow!

After a short break, where I fell asleep for about an hour, the newlyweds emerged on the balcony at Buckingham Palace to greet the public.  And share their first kiss! 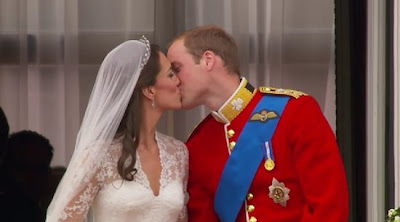 There is another reception this evening, and Kate changed gowns.  Personally, I like this one much better. 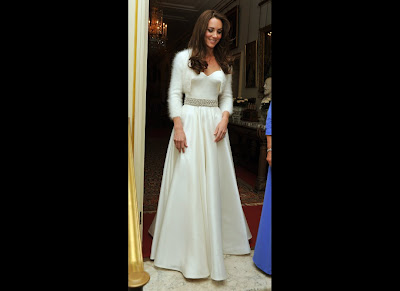 Today was truly a real life fairytale.  A common girl became a Duchess, a Princess, the future Queen of England.  I loved being able to watch this event today and I'll love being able to look back on it and remember.
No comments:

I had a very busy weekend.  On Saturday, Drew and I went to his cousin's wedding. 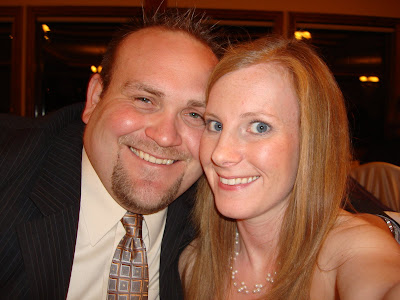 After the ceremony, there was a receiving line.  We met the bride's parents for the first time.  When Drew introduced me to her mom, she said, "Well, you look like you're about 12".  I know that people don't mean it bad, but it really is rather insulting.  People could at least say that I look legal :)

The reception was held at a beautiful golf club.  We were dubbed the "cool table" and we really had a great group of people.  They were all new people and we definitely made new friends. 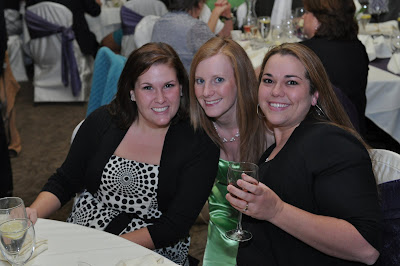 This is Charlotte, me, and Ali.  Charlotte and Ali are from Tennessee and Ali has known Rob (the groom) for many years.  Rachel and her husband, Noah, were also at our table.  Seriously, such fun people.  During dinner, I decided to try a little White Zinfandel, basically because the color of it looked pretty.  Who knew that it tasted so good!?!  I had three glass of wine that night, which is about two more glasses than I usually have.  I was feeling good! 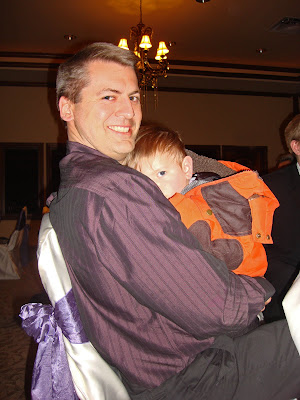 I looked over during dinner and saw Ibrahim snuggled up on Brad.  He was so sleepy and looked adorable trying to sleep.

Sunday, I went to Amanda's baby shower.  I'm lame, and didn't take any pictures.  Frankly, it was hard for me.  I really hope that I'm at least pregnant at the next baby shower that I attend.

The other Drew is in town this week with his family, so after the shower, I met up with everybody (Drew was already with them) and we hung out for awhile.  Emma is talking up a storm and I can't believe that she's going to be 2 in a couple of months.  Where does the time go?
3 comments: 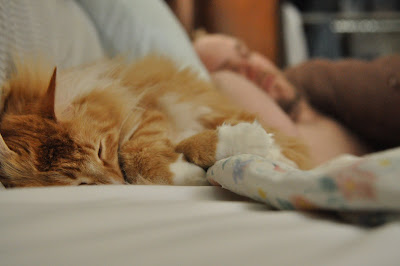 Does it get any more precious than that?﻿
3 comments:

My BFF (my period) decided to make an appearance on Tuesday.  I called my RE's office to let the nurse know.  She told me that she didn't have the results of my biopsy yet, but that we could go ahead and get started on the meds for IVF if we wanted to.

Drew and I talked about it, and we decided that we're going to wait and start next month.  We have a wedding to attend next weekend, and I have a baby shower the next day, and I don't know how the meds are going to make me feel.  So now, I just have to hope and wish and pray that the days fall nicely so that I don't miss my sister's Prom and their graduation.

I did get the results of my biopsy today, and they are positive, which is good, that's what we wanted.

I'm feeling a little nervous about this.  I feel like I'm putting all of my eggs in one basket.  I have looked forward to doing IVF ever since my OB/GYN told me that I would need IVF in order to get pregnant.  So why is it that now that it's almost here, I'm terrified?

I'm scared of it not working.  I'm scared that I will have gone this far and take a whole bunch of medicine and something will go wrong in the process and we won't even get to the point where we can transfer an embryo.  I'm terrified that we will be able to transfer an embryo and that it won't stick, or that I'll miscarry.  I just don't know if my heart can take that.

What I do know though, is that I wouldn't be ok with not trying.  As scared as I am of everything to come, I'm more scared of what would happen if we didn't try.  I think that I'm just scared of the unknown right now, and how much unknown there is in this.
No comments:

Drew's grandpa passed away on Tuesday, March 29, and today was his funeral.  He lived such a full and amazing life that it was so special to hear stories about his past.

He enlisted in the Army Air Corps in 1942.  He was shot down over Germany and became a POW.  He was honorably discharged in September 1945, and returned to school.  He met Drew's grandma his first night back, and they were married in November.  Yes, they married 2 months later!  And they have been married 65 years!!!  If that's not inspiration, I don't know what is.

He spent many, many years doing many, many jobs and touching and inspiring many, many people.  Those are really the best words that I can use to sum it up, and they aren't very good at all.  The stories of people who spoke at his funeral were amazing.  He accomplished so much!

His funeral really made me think a lot about life.  Drew's grandpa touched so many people, and they all had such great things to say about it.  Who have you touched in your life?  What will they say about you?
No comments:

I have finally launched my website and have opened up for business!  Yay!!!

I am so excited to see where this takes me!!
No comments: