Today, I started my journey into getting braces. I had x-rays and molds done today. It was all very painless. As the woman, who is only slightly older than me, was doing my molds, she told me that I have tight lips and cheeks. Um. . . thanks! I think.

As I was leaving, the woman told me that the doctor was going to take a look at everything and then he would send me a letter to let me know what my treatment plan will be and what to do as my next step. Well, I already know what that is going to be. I'm going to have to get four teeth pulled.

And that's the part that I am terrified about. They aren't going to knock me out. I have to be conscious while they rip four teeth out of my gums. Yes, I'm going to have Novacaine, but that's not going to stop the sounds. Oh.the.sounds!!! I'm absolutely terrified.

According to the orthodontist, he can put the braces on four or five days after I get my teeth pulled. He said that I'll probably have to wear them for two years. He also said that, not only do they have clear brackets, but they have clear wires too. So I won't be a complete tin grin.

Two years and I'll have a beautiful smile!
No comments:

One is the Loneliest Number

I got my first taste of Drew being a flight mechanic this weekend. He called me Friday morning, while I was at work, to let me know that he would be going to California for a couple of days. His work scheduled his flight out and he left pretty immediately.

He flew to Phoenix where he had a connecting flight to Ontario, California. He said that it was beautiful out there. Unfortunately, he had to leave so quickly that he didn't remember the camera.

I can tell that he's missed me too, because he has called me and texted me incessantly. We're so not used to traveling on our own! :-)

He's on his way home now and I couldn't be happier. As nice as his paycheck will be, I would much rather have him working here than in another state.
No comments:

Last weekend, Drew and I went to Edwards Apple Orchard with Rachel and her boyfriend, Adam. The whole reason I wanted to go, besides to get doughnuts, was to pick apples. Unfortunately, apple picking didn't open until Wednesday. So, I made Drew go again today to pick apples. 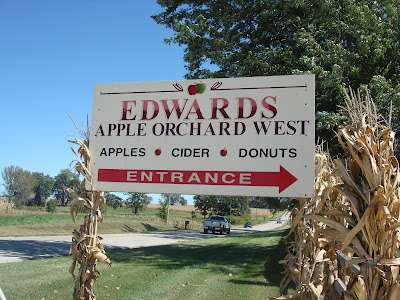 The only apples that we could pick today was Jonamac. 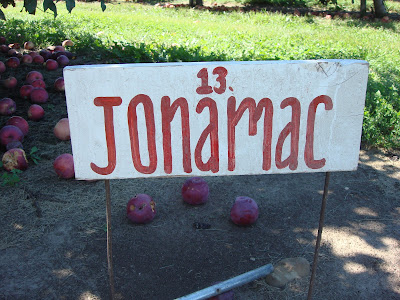 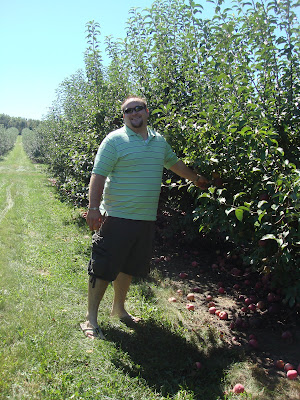 Some of them were huge! 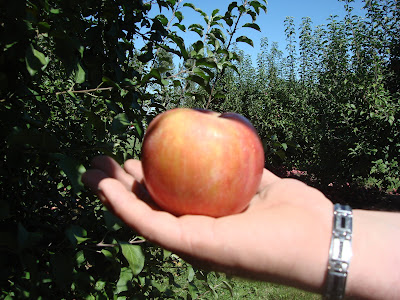 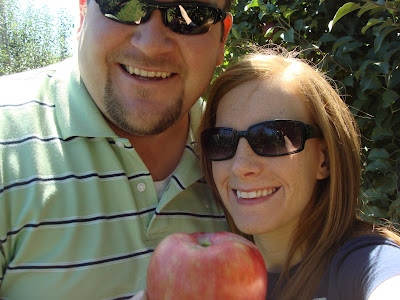 There was only one size bag that we could use to pick apples and when the bag was filled, it came out to be a half bushel. Have you seen a half bushel? Well, we got about 40 apples! Needless to say, I came home and looked up a bunch of recipes. There will be many apple themed treats in our house for the next couple of weeks.
No comments:

After my crummy day yesterday, I knew that I need some major distractions this weekend. My sister came over today and we had originally planned on going to On The Waterfront. It's cold here today! As in, there is no way that I'm gonna go hang out outside with scads of people. So, we needed to come up with something else to do. She didn't want to go shopping because I offered to go to Woodfield.

I sat thinking and I knew I was craving something. All of a sudden, it hit me! I wanted a cupcake. I wanted to go to a cute little bakery and pick out a cupcake and sit at a cute little table and eat my cupcake. The problem is that we don't have a cupcake bakery here. Sure, we have bakeries, but not CUPCAKE bakeries.

Enter Google! I found one in Naperville, which ended up to only be about an hour and 10 minutes away. Yes, Rachel and I drove a little over an hour for a cupcake. But they were delicious!!!! 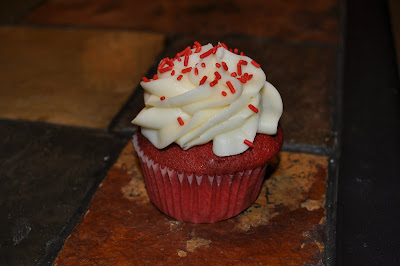 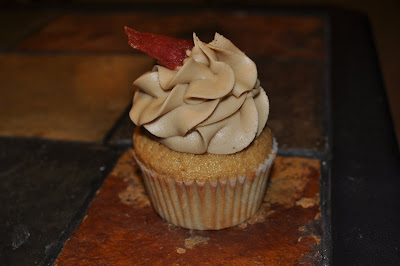 Sugar Monkey Cupcakes is a darling little bakery in downtown Naperville. I'm smitten with it! They have daily flavors that they make and then there are flavors that are made specific to the day. They make a certain amount everyday and when they sell out, they're gone. When we got there today, there was only Red Velvet (first picture) and Maple Bacon (second picture) left. And let me tell you, both were F-A-N-T-A-S-T-I-C!!!!!
I can't wait to go back and try more flavors!

After speaking to a nurse, she said that she would leave a work order at the front desk for me to pick up on Friday morning. I would then have to find a place in Wisconsin to do my blood draw. Pain in the ass, but doable.

My period showed up early afternoon Friday so I knew that I would have to go get my blood drawn either Saturday or Sunday. Saturday was pretty much out of the picture since it was the wedding, so Sunday it was.

Sunday morning, Drew and I went to their "emergency room" and had my blood drawn. The nurse had to fill a good dozen vials. A DOZEN!!!!!!! It wasn't as bad as I thought, but still not pleasant. Thankfully, she worked quickly.

The nurse said that she would send my results to the doctor. Yesterday, I was talking with a coworker of mine and debating whether or not to call the doctor's office. I hadn't heard from them yet, but the nurse did say that some results could take close to a week to get.

I decided to call this morning because, based on our consultation, the doctor had mentioned needing to do the SIS or HSG on CD10, which would be Sunday. Well, the nurse informed me that she did have all the results and that everything looked really good. I told her what the doctor said about the other tests and she said they usually happen on CD 7, 8, or 9. Today is CD8. Crap!

When I told her this and that I didn't want to miss this cycle, for very obvious reasons, she said that she would talk to the doctor and call me back. She eventually called me back and told me that there was nothing the doctor could do because the hospital was already behind on their surgeries. I would have to call next time on CD1 to schedule the tests. She even had the balls to tell me that I was supposed to call on CD1 to let them know that I had started.

Excuse me woman! But I did call and inform you guys that I would be starting. Plus, you received my bloodwork. Shouldn't that be evidence enough that I started? Shouldn't you guys have called me to let me know that you received my results and to schedule the next step that you want to take.

To say that I'm beyond frustrated is an understatement. I feel like I'm the only one trying to do anything to become pregnant. I'm charting, taking vitamins, eating/drinking or not eating/drinking certain things, making uncomfortable changes in my lifestyle so that I don't become sick. And then to have the doctor tell me that I'll have to wait until next month! I'm just heartbroken. I don't think that I have ever felt so crushed in my entire life.
No comments:

AYKM: Keep Your Hands to Yourself!

Yesterday, my mom called me and told me about a situation that happened at a school around here involving someone that she knows. We'll call this woman Beth. Beth has a 7 year old daughter that we'll name Michelle.

Apparently, Michelle was at school the other day and was in the bathroom. Another little girl came into the bathroom and knocked on the stall door and demanded to be let in. Michelle said no and that she was going to the bathroom. The other little girl then crawled underneath the stall door and began choking Michelle. I guess that a teacher walking by heard the commotion and broke the girls up. After a short discussion in the principal's office, he sent the girls back to class. Beth was called to come to school to discuss the incident.

Beth, of course, was outraged. Police were never called and the other little girl was not disciplined at all. She did not receive a detention, suspension, or expulsion. And, when asked why she did it, she responded that she didn't know and that she just wanted to be friends with Michelle.

Michelle is now terrified to be alone, as can be expected. At 7 years old, this little girl has experienced a trauma that no girl should ever have to experience.

There are so many parts of this story that make my blood boil. First of all, what is going on in this little girl's life for her to learn to choke another person? She, very obviously, needs to be in some sort of counseling to manage her anger. Second, the school did absolutely nothing about it. There was no punishment for the other little girl. She was simply sent back to class. Beth was told that the school could not call the police because a weapon wasn't involved. Beth could file a report if she chose to however. The other little girl was choking Michelle to the point where she couldn't breathe. If that teacher hadn't been walking by, Michelle could be dead.

Stories like this make me not want to have children. It is so hard to know that our children will have to grow up in a world like this. This story was also the final push (that I didn't really need, by the way) to move out of this school district. I do not like where our children would be going to school if we continue to live here. And, while I know that problems with children exist in every school, the way that a school handles the situation differs. I AM NOT OK WITH HOW THE SCHOOL HANDLED THIS SITUATION.

I pray that Michelle can overcome this unfortunate situation. And I pray that the other little girl gets the help that she so desperately needs.
No comments: