Drew and I took Annelise to Edward's Apple Orchard today.  The weather was absolutely amazing today!  Beautifully sunny and in the upper 70s!  You can't get much better than that.

When we first arrived, we let Annelise see some of the animals and run around the playground for a little bit. 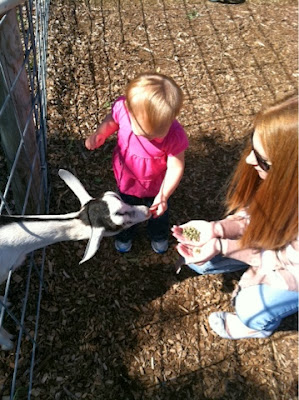 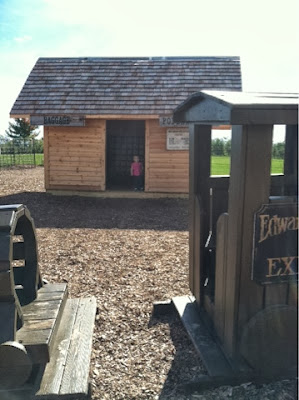 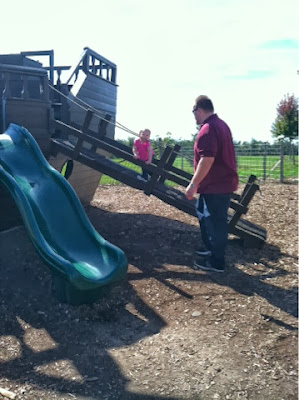 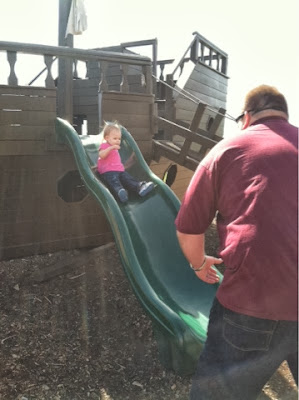 I tried to have her stand by height measuring photo board, but she was NOT having it! 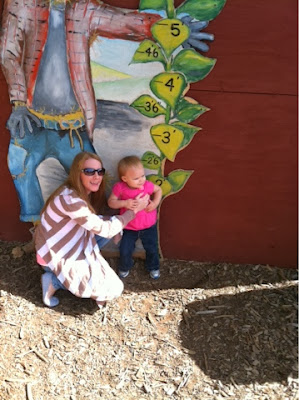 That's about as good as we could get.  She really just wanted to run around.

We went for a horse drawn wagon ride around the orchard.  Annelise really loved seeing the horses and she was even allowed to pet them afterwards! 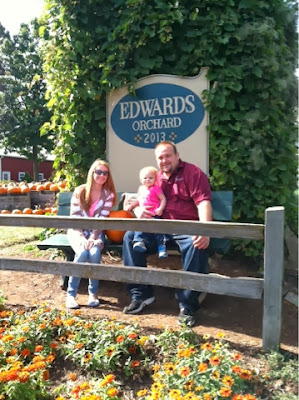 Of course, no trip to the orchard is complete without buying some apple cider doughnuts and apples!  We stocked ourselves up and said farewell to the orchard.  I have a feeling that we'll make another trip back before the end of the season.
No comments:

A few weeks ago, I called my RE's office because I had a couple of questions about the blood work that I needed to have done.  I found out that my doctor was leaving and going to teach at a college and that a new doctor was taking over the practice.  This new doctor was already seeing patients.  I never would have known this had it not been for my call!  (Would anybody else have been a little irritated about that?)  During my conversation with the nurse, I found out that he (sometimes) has a different protocol for the way he does things.  This worried me some because I had already set up a plan of action with my old RE, and I was concerned that there would be things added or not needed.  So, I scheduled a consultation with this new doctor so that we could meet him and go over the course of action for my treatment.

Drew and I went and met with Dr. D a few weeks ago.  He's such a nice guy.  He seems very intelligent, down to earth, and he's been through IVF himself.  Most importantly, he didn't want to screw around with what worked last time for us to have a healthy pregnancy and baby.  Great news!

Dr. D did inform me that I would have to update my blood work and that it was mandated by the government for the lab that we use.  Ok, fine, even though I was about 99.9% positive that I didn't have any STDs, I went and got the blood work done.  I don't have any STDs, but I did find out that I'm anemic.  Lovely.  A week after that, I had an ultrasound done to check my uterus and ovaries.  Ute looked good, but ovaries had some cysts.  He said that they looked exactly like endometriomas, which he would expect because of my endometriosis.  He said that since he was fairly confident that was what they would, he wouldn't have any problem moving forward with a FET whenever we were ready.  He said that if I was concerned about the cysts, that he could do some testing and surgery to remove them.  I basically said, "No thanks!" and we moved on.

So, everything is all set to go for a Frozen Embryo Transfer whenever we decide to go ahead with it.  Drew and I are still trying to discuss when the best time would be.  We keep tossing around different dates and scenarios and trying to pick the best one.

I'm feeling very lonely this time around.  I feel like I had more of a support system the last time we cycled.  I know that a lot of it has to do with the fact that we aren't even really telling people that we're cycling again, but even the people that do know seem a little distant.

I'm terrified going into this.  I'm so worried about something going wrong.  We only have two snowbabies and if something goes wrong, we're out of luck.  Drew and I have already decided that we probably won't ever do a fresh IVF cycle again.  There is so much riding on the thaw and transfer.  I'm scared of the embryo not surviving the thaw, or not implanting.  I'm scared of miscarrying again.  It's been a long time since my body did the pregnancy thing.  What if it screws it up again?  I know that I really need to calm down and relax, but that is so hard to do.
No comments:

The weekend after Labor Day is when Roscoe puts on the annual Fall Festival.  It usually runs Friday, Saturday, and Sunday, with a parade Sunday morning.  I went many years when I was younger, and I was so excited to take Annelise this year.

Drew and I drove up there Friday night to walk around some, and so that Annelise could ride some rides.  She absolutely LOVES riding rides.  I usually start by taking her down the big slide, and then move to some of the other rides.  I think her favorite is the dragon roller coaster.  As soon as she sees it, she starts signing "more" and wants to run over to it.  While she's on the ride, she never once cracks a smile, or acts like she enjoys it.  She just sits there all content, enjoying the ride.  As soon as the ride stops, she hops up to get off, but then immediately starts signing "more" to go again.

Today, Rachel and I took Annelise to the parade in the morning.  I was excited to take her because I thought she would really enjoy seeing the bands and the local dance teams and cheerleaders.  She did enjoy it, but she also enjoyed collecting the candy that is thrown out. 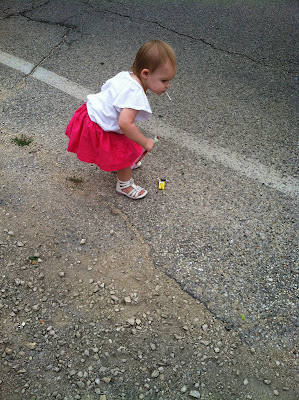 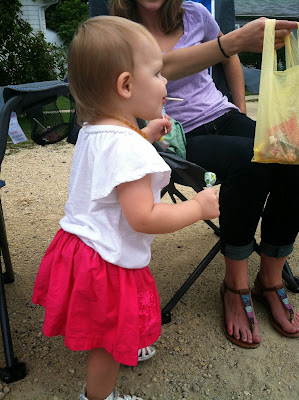 It took her a little bit to get the hang of picking the candy up and putting it in the bag, but once she did, she was all over it.  She would run and pick up the candy, then toddle over to put it in the bag, then run back to me for me to pick her up.  When some more people came along and threw candy out, she would wiggle to get down, run grab the candy, and repeat the whole process.  And those Dum Dum suckers?  She absolutely loves them! 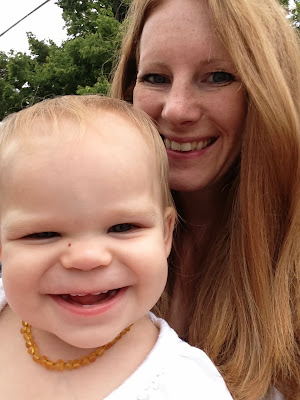 We're trying to entertain ourselves while waiting for the parade to start.

I went through her bag of stuff tonight and found a temporary tattoo and thought I'd put it on her.  Her mind is always blown whenever she gets a hand stamp at Kindermusik, so I knew she'd be amazed at the tattoo. 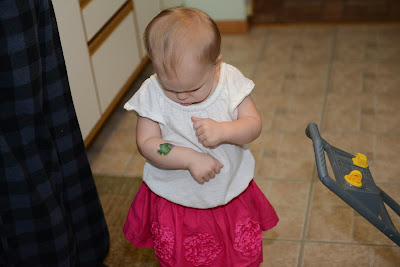 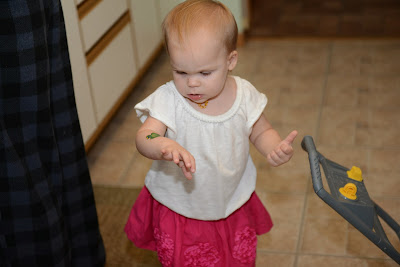 She just kept staring at it, and touching it.  It was so funny!
No comments:

I recently upgraded my camera, so I've been snapping away more than usual.  My sister and I took Annelise outside to play this evening, and I practiced on my new camera while she ran around. 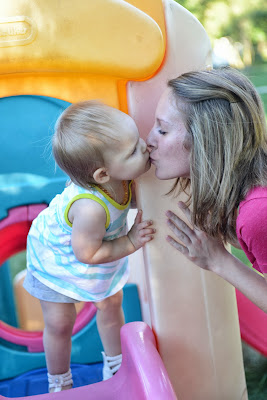 Why aren't there any adorable photos like this of me and my child?  Oh right, because I'm always behind the camera!  It warms my heart that I can capture moments like this though. 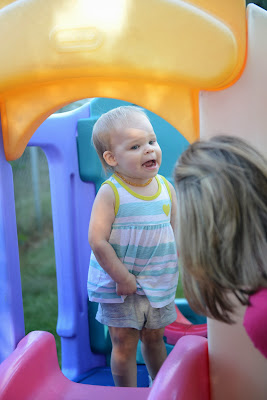 Annelise was having quite the conversation with Rachel.  Her face cracks me up! 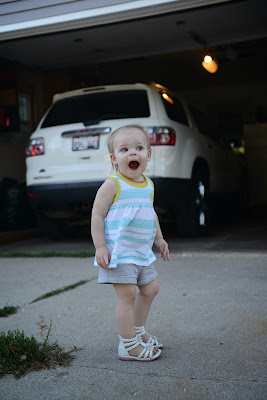 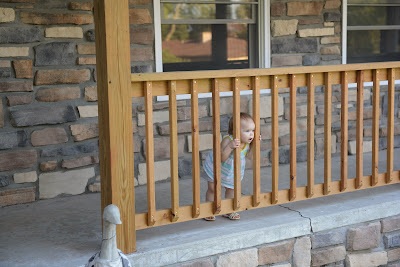 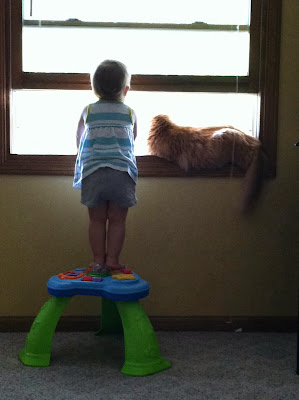 Her new favorite activity is to use her activity table as a step stool.  She lugs that thing to wherever she wants to be to see, climbs on top of it, and then proceeds to do what she wanted to.  For the most part, I allow her to do it.  But then she decided that she wanted to stand in front of the gate at the top of the stairs and I quickly put my foot down on that one.
No comments: