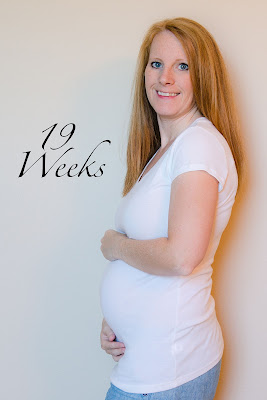 Yep, pregnant again.  And this is probably the last time, considering it's our last frozen embryo.  I've been such a slacker and haven't blogged in over a year.  I'm disappointed in myself because I really like being able to look back at these memories.  I'm hoping to get better about this and start blogging more.  I want to be able to look back and remember all the fun (and sometimes not so fun) times we had.

So, I know that you're all ready for some pregnancy details.  We found a fertility clinic down here and met with the doctor.  All the testing leading up to the transfer went well, with no issues.  Even shipping the embryo down here went off without a hitch.  Transfer day was April 11th and went well. 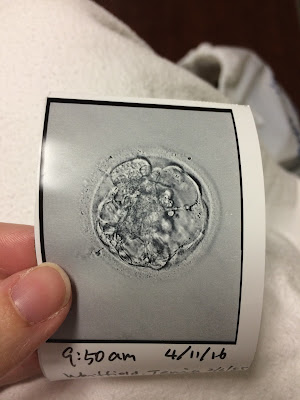 Isn't that such an amazing sight??  It just blows my mind that babies start out like that.  It's such a miracle when you can see their beginnings.

The pregnancy has gone well, for the most part.  I kept waiting and waiting for morning sickness to hit, but it seemed like I might be getting lucky.  Until, we had a very large scare.

In mid-May, Drew, the kids, and I traveled back to Illinois for a few days.  Then, I left for a girls' trip to Florida for a few days.  I got on the flight to go from Florida to Illinois and didn't have any problems.  Drew and the kids met me at the airport in Chicago, and then we got on a flight to travel back to Houston.  The flight was full, and it was a miracle we made it on.  I sat with the kids in a row, and Drew sat up in the cockpit.  When we landed, I stood up and my pants felt wet.  It thought maybe I had sat in some water that Annelise spilled or something.  I went to the bathroom and discovered that it wasn't water, but blood, and a lot.  Enough that I had soaked through my pants.  Cue panic!

I told Drew what was going on once he had made his way back to us.  We gathered all of our stuff, and made our way down to the baggage claim.  Once down there, I changed my clothes, and called the RE's office.  They wanted me to come in right away.  My heart was in my stomach the whole drive to the doctor's office because I just knew that I had lost the baby.  You don't have that much blood and everything is just fine.

Imagine my relief when we got to the doctor's office and saw a healthy heartbeat on the ultrasound screen!  The doctor couldn't see any reason for the bleeding and said that sometimes stuff like that just happens.  For the record, I'd much prefer for stuff like that to NOT happen again!!

Since then, it's been fairly uneventful.  Morning sickness did set in, but nothing major that some good meds won't help.  I'm (obviously) getting bigger.  I've had some bad round ligament pain that is the worst at night when I'm sleeping and it makes it painful to roll over.

I felt movement for the first time in my 13th week.  I felt some outside kicks during my 17th week, and Drew was even home to feel them too!

Next week is the anatomy scan.  This time, we've decided not to find out the sex.  I'm a little more excited about this than Drew is.  I said after we had Harrison, that if we get blessed with another baby, that I wanted to wait to find out.  I don't think Drew actually thought I meant it.  I saved everything from both kids, so I have clothes and blankets.  I'm sure I'll have to get a few things since this baby will be born in December and all the boy stuff I have is summer clothes.

I also want to try for a VBAC.  I have picked a doctor who supports VBAC and she determined that I would be a good candidate for it.  I have my fingers crossed, but I know that things don't always go as planned and I'm okay with that also.

I've actually been very good about doing weekly pictures.  My weeks change on Wednesday, and I have a book study group that I meet with on Wednesday mornings.  So, I usually look presentable to take a picture.  This baby might have the most pictures out of all three!  And on the correct day too!

Now, let's just see if I can blog (a lot) more than I have!
No comments: