Good grief, you'd think I was busy with two kids or something!  I'm not going to sugar coat it, the transition to two kids has been tough.  Annelise is a typical two year old.  One minute she'll be sweet as can be and my heart just wants to burst at her adorableness, and the next minute she's like Satan's spawn and I'm afraid that her head is going to turn around in circles.  Bipolar much?  I'm very much looking forward to when she's old enough to manage her emotions a little better.  For now though?  All I can do is try to help her through it and remain patient myself.  And, if I'm being honest, it's a work in progress for me too.

Harrison is growing like a weed.  He's getting more alert every day.  I just finished his birth story book and I can't believe that it's already been almost two months since he was born.  I'll be writing his two month letter in just a few days.  Geez!

Drew and I have decided that we're going to sign Annelise up for gymnastics classes.  She's been in Kindermusik for quite a while now, and I think we're ready to switch it up some.  We're going to do one semester of gymnastics and see how she likes.  We plan on re-evaluating after the holidays and decide if we'll continue the gymnastics, or go back to Kindermusik.

As if I don't have enough on my plate with a toddler and a newborn, I've decided that I'm going to work on doing some homeschooling with Annelise.  She learned how to count to 10 the other day and seeing her excitement over learning that makes me want to teach her more.  She seems so eager to learn now.  I'm going to try and blog what we do along the way.

And since every post is better with a picture, here's the two kids yesterday. 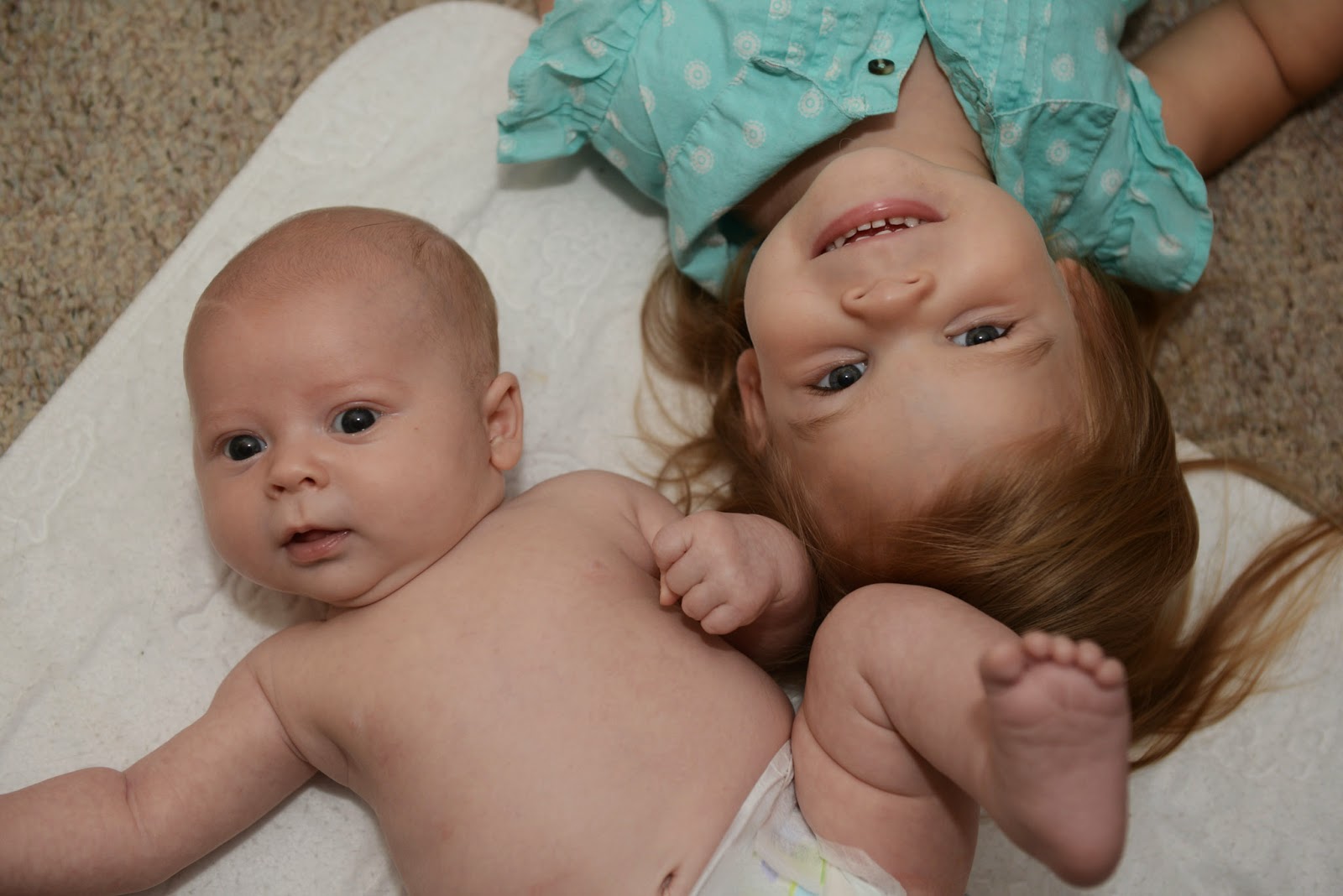 I just can't believe that a whole month has flown by since you were born!  I have a feeling that your first year is going to go much faster than your sister's did.  I've been a bit of a slacker so far, but I'm going to work very hard to make sure that I do as good of a job, if not better, at documenting it.  I remember making your sister's first year book and wishing that I had taken more pictures.  I don't want to look back and think the same for you.

Let's start with sleep.  You are a pretty decent sleeper.  You go to bed between 10-11 PM every night and sleep until at least 3 AM, sometimes even later.  So, we get a stretch of four to six hours.  After that first wake up, you'll get up again an hour or two later, eat, and usually fall right back to sleep.  Most of the time I let you snooze on me until I get out of bed to get your sister up.  You usually wake up shortly after that.  Naps have been a challenge some days.  You love to sleep on me, which is to be expected.  Sometimes I can sit there and let you sleep, but some days it's not really possible.  I've noticed that you like to sleep on your side.  So, if I put you down in your swing, I prop you on your side and you'll sleep longer that way.  I need to work on getting you to nap in your crib.  However, I need to order a monitor for your room. 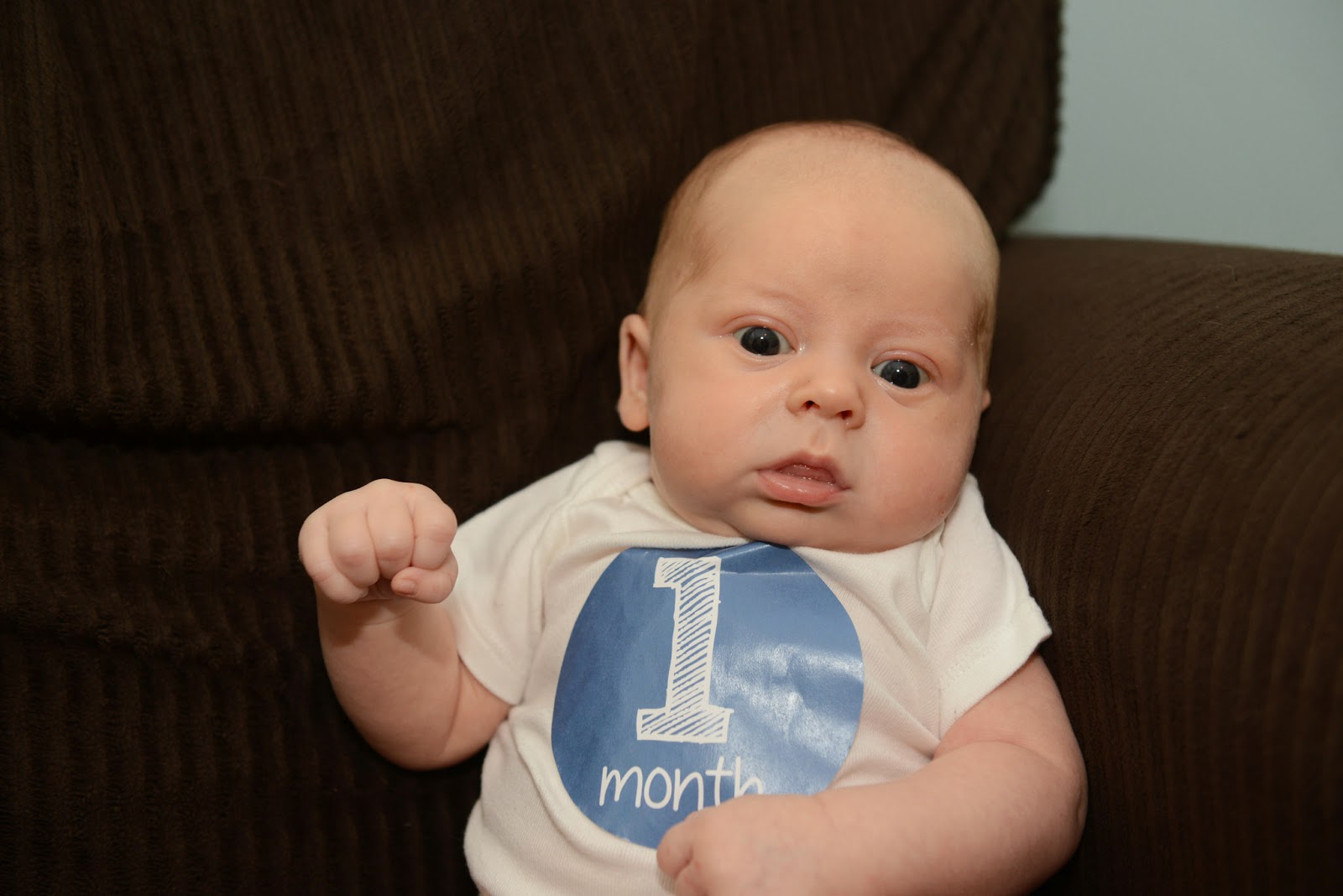 Breastfeeding has gone wonderfully!  You latched on right away at the hospital and haven't had any issues at all.  You spit up like crazy though, and it really bothers me.  I hate it because I feel like it's something that shouldn't happen and I don't want you uncomfortable.  I try to burp you during your feedings and stop you before you get too full, but it doesn't always help.  I've also tried to cut dairy out of my diet, but I don't feel like it really matters much.

You also had your first bottle this month.  I took your sister to Kindermusik and left you at home with Aunt Rachel and Daddy.  You were hesitant about the bottle at first, but once you realized that you could get milk, you liked it.  The same thing happened with your sister.  You haven't had any issues with taking a bottle, a paci, and going back to the breast.  I'm so thankful for that! 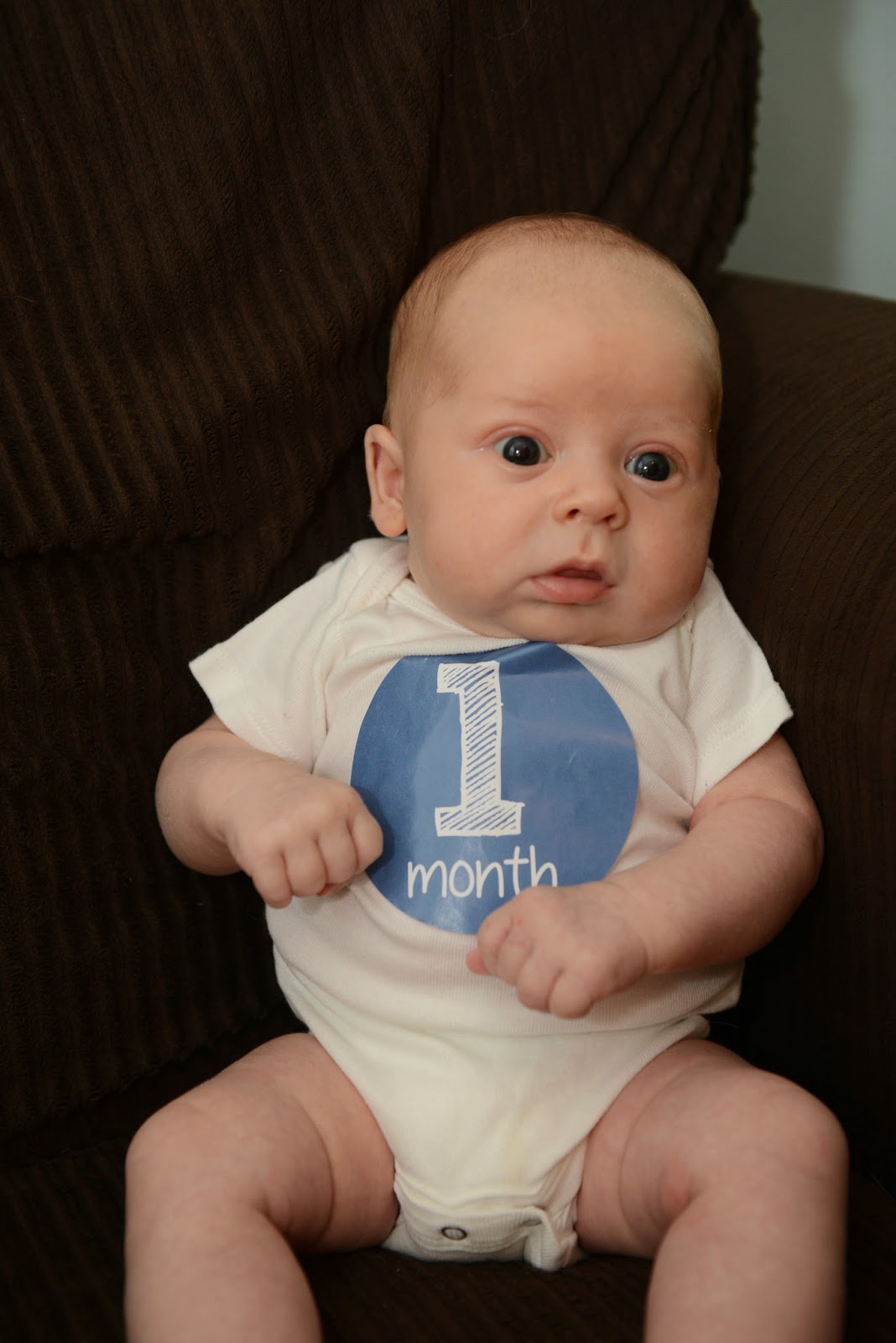 You have started to become more aware and alert.  I like to interact with you, even if you are quite boring at this age.  I'm so anxious for you to smile and "talk" to me.  I've forgotten how boring this age is.  You are quite cranky in the evening though.  It's very hard to do dinner and bedtime for your sister when I'm home by myself and you just want to be held all night.  I feel so bad when I have to put you down and you cry so hard.  It really does break my heart.

Annelise is obsessed with you!  She is always asking to hold you, and if you're crying, she asks if you're ok.  She gives you a ton of hugs and kisses.  I can see that you've started to become interested in her and will look at her.  She has some work to do with being gentle with you, but I know it won't be long before you're able to hold your own against her. 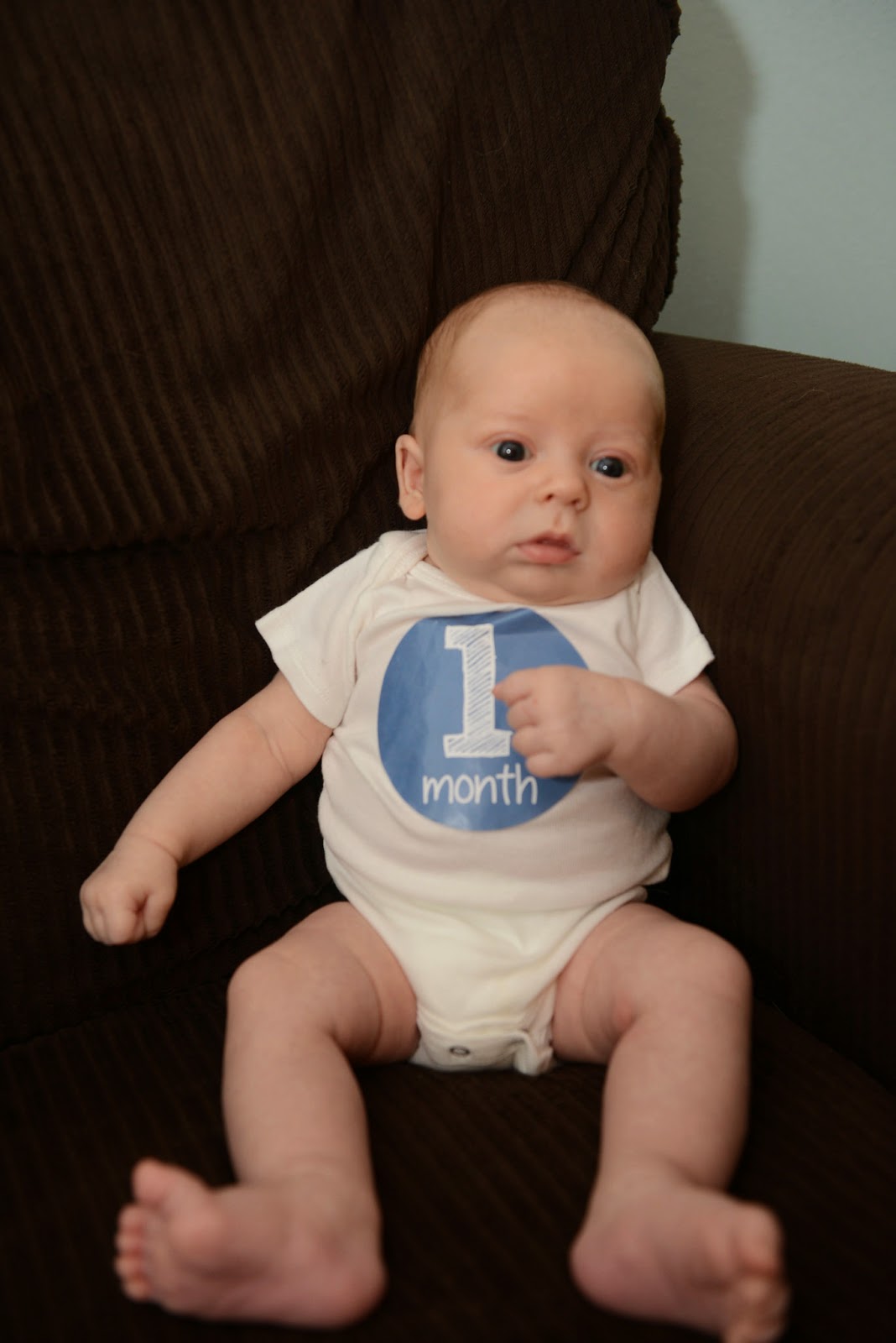 I stepped on the scale with you and it said that you weigh 10 pounds.  I don't think I believe that, but it could be true.  I have already moved you into size one diapers, even though they are pretty big.  I've also been putting you in 0-3 month clothes, even though those are fairly big too.

I almost don't remember what life was like before you arrived.  You have fit into our family and I love being the four of us now.