I know that I'm a little behind on the recap, but better late than never, right?  Right!  And I wanted to blog about it so that I can look back and remember.

We decided to go to Georgia this year.  I was very nervous leading up to the trip.  This is the first long drive that Annelise has had since she was a baby, and the very first for Harrison.  We decided to drive overnight to make it easier on the kids.  It's rough for the parents, but I would rather suffer a little than have the kids be miserable.  They were amazing travelers! 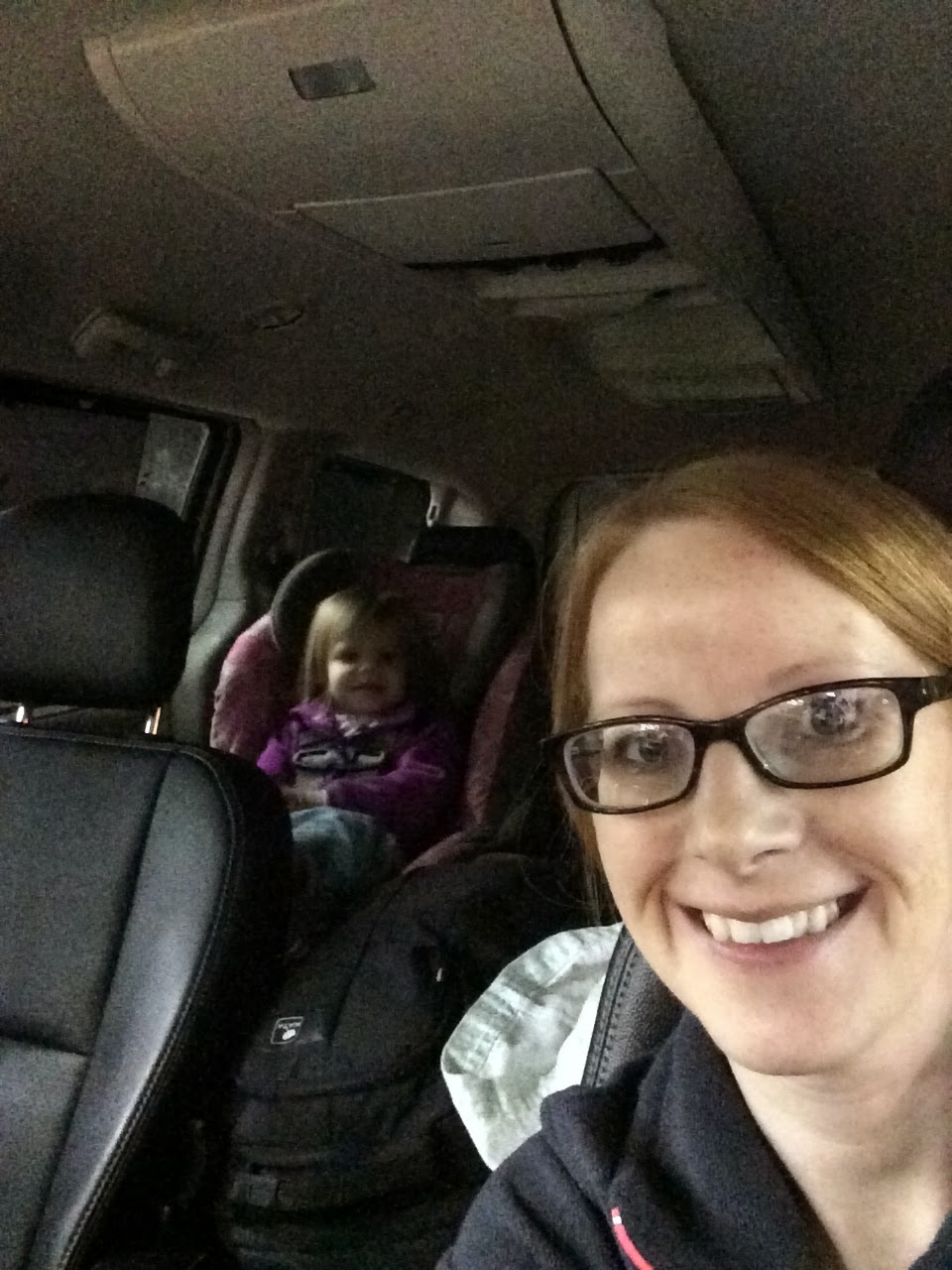 I started off driving so that Drew could get a little nap in.  We left about 8 PM.  Annelise was awake for a little bit, and then eventually passed out.  I drove until about 11 PM, and pulled over so that Drew could take over.  The details are a little foggy at this point, but I think Harrison woke up around 3 or so.  We stopped at a gas station to get gas, use the bathroom, and I fed Harrison.  Annelise woke up and was awake for a little bit, but Harrison fell back to sleep pretty quickly.  Drew and I switched driving again right before Chattanooga.  I had the lovely pleasure of driving through the mountains.  In the dark.  Harrison woke up again around 7 I think.  So, I pulled over to feed him.  We got Annelise some breakfast and she was pretty darn crabby about being in her car seat still.  We assured her that we could be at Jess and Eric's soon.  We got to their house around 9 AM, I believe.

We spent the rest of the morning relaxing a little, and visiting with everyone.  Drew, Jen, and their kids were already there.  I showered and got ready to go over to Whitney's house.

I packed up the kids around noon and headed over, while Drew stayed back to take a nap. 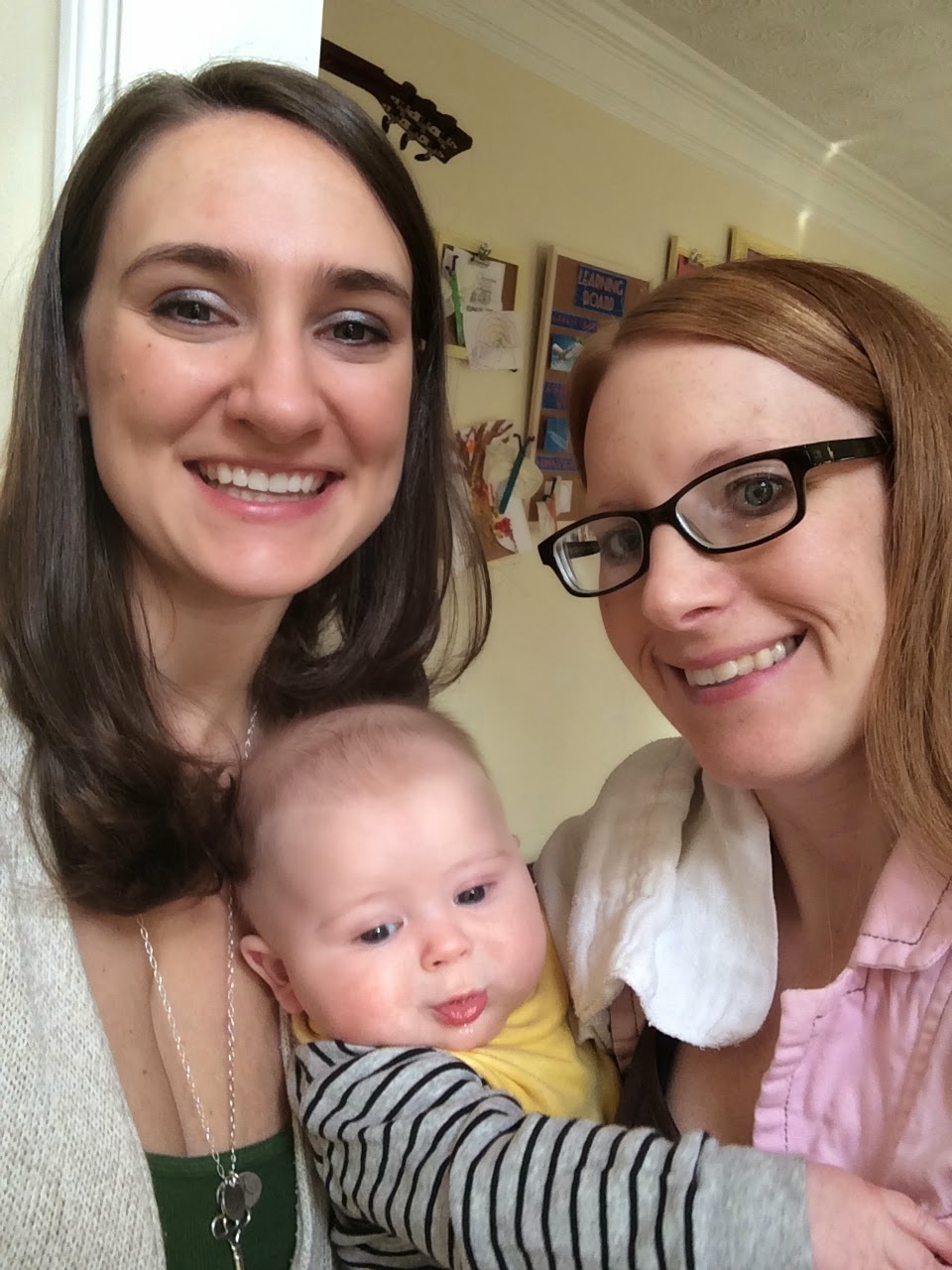 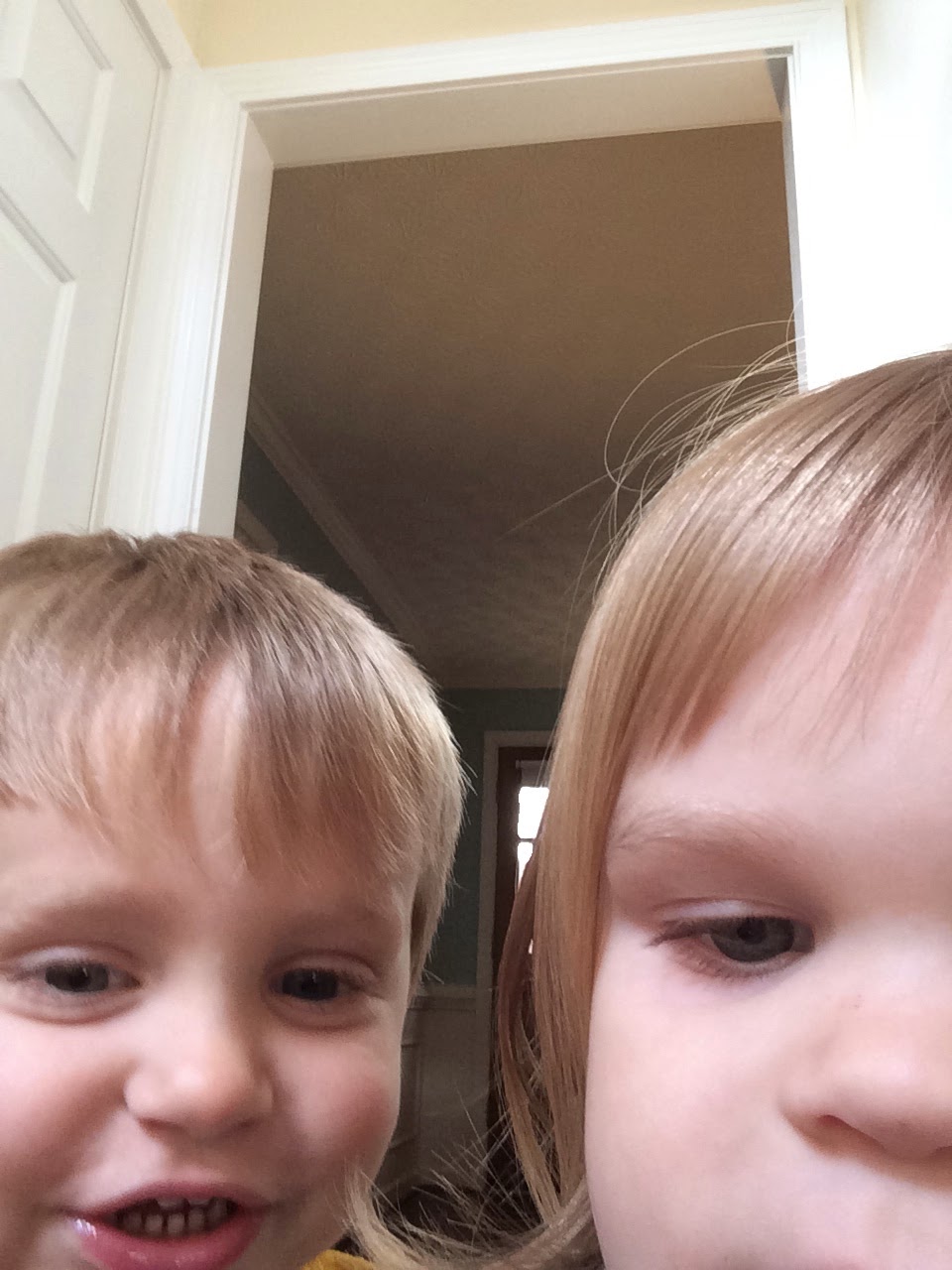 Another friend, Carrie, and her daughter, Lilah, also came to visit since they don't live too far from Whitney.  We all met in an online group and have been friends for 7 years or so.  That's just crazy to think about!  We spent the afternoon visiting with them, and then went back to Jess and Eric's.

I was nervous about how naps and nighttimes were going to go since we would all be sharing one room.  Surprisingly, it was not too bad at all!  Annelise slept in her PeaPod very well, and Harrison slept about the same as he usually does.

Thanksgiving was mainly spent eating and hanging out with everyone.  Us girls looked through all the ads, like we do every Thanksgiving, and formulated a plan for shopping that evening.  The kids all played together while we waited for the fantastic dinner that Eric cooked. 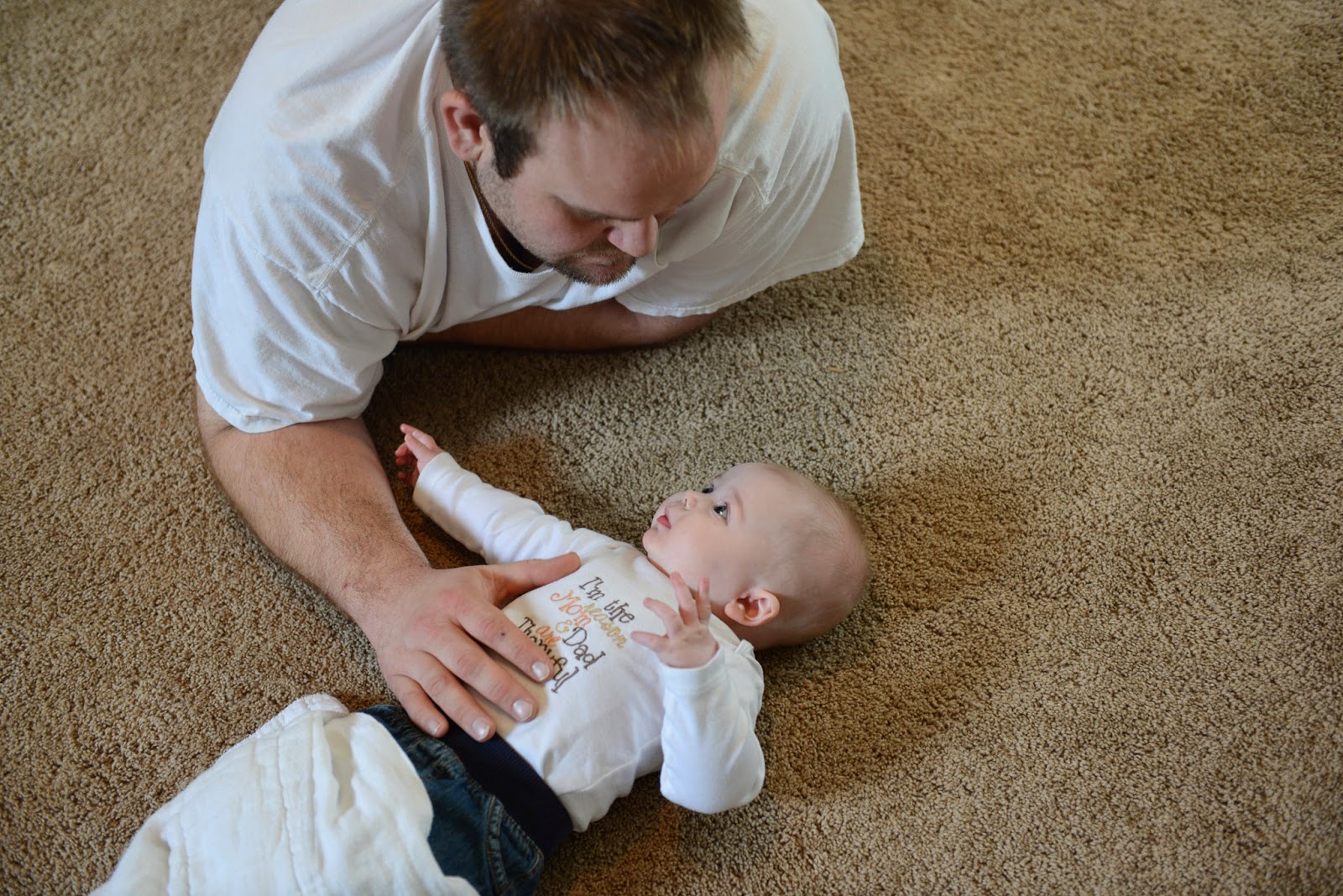 I busied myself with taking pictures of the kids.  I just love how they are looking at each other. 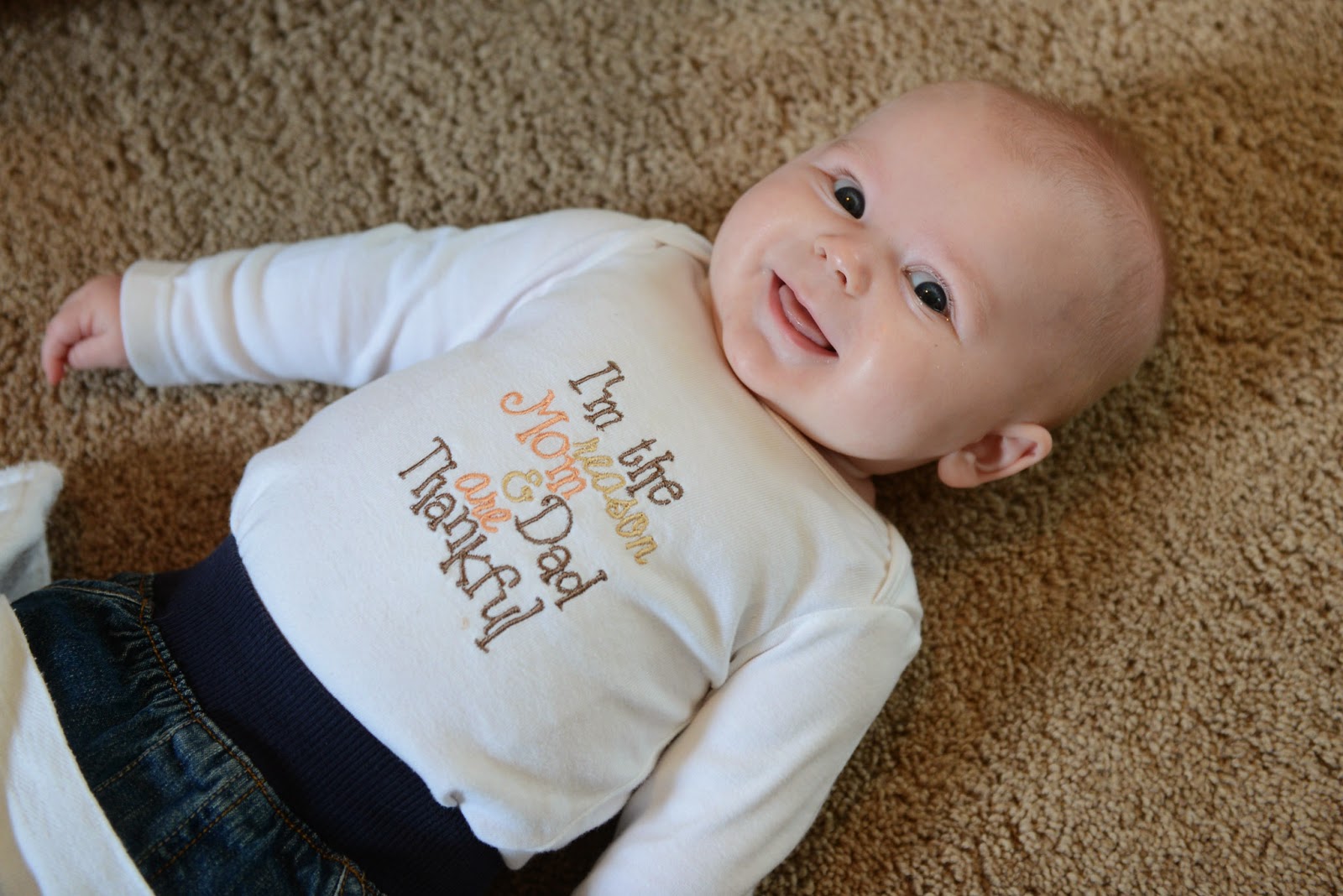 Leading up to Thanksgiving, I kept looking for an outfit for Harrison to wear, since it's his first Thanksgiving.  Nothing I found really stood out to me.  Then, I remembered that Annelise wore a onesie that I ordered for her and that it was gender neutral.  She wore pink pants with it.  I figured that I could have Harrison wear it too.  Turns out it's a 9 month onesie and fits him perfectly!  I think it's really special that they both wore the same onesie on their first Thanksgivings. 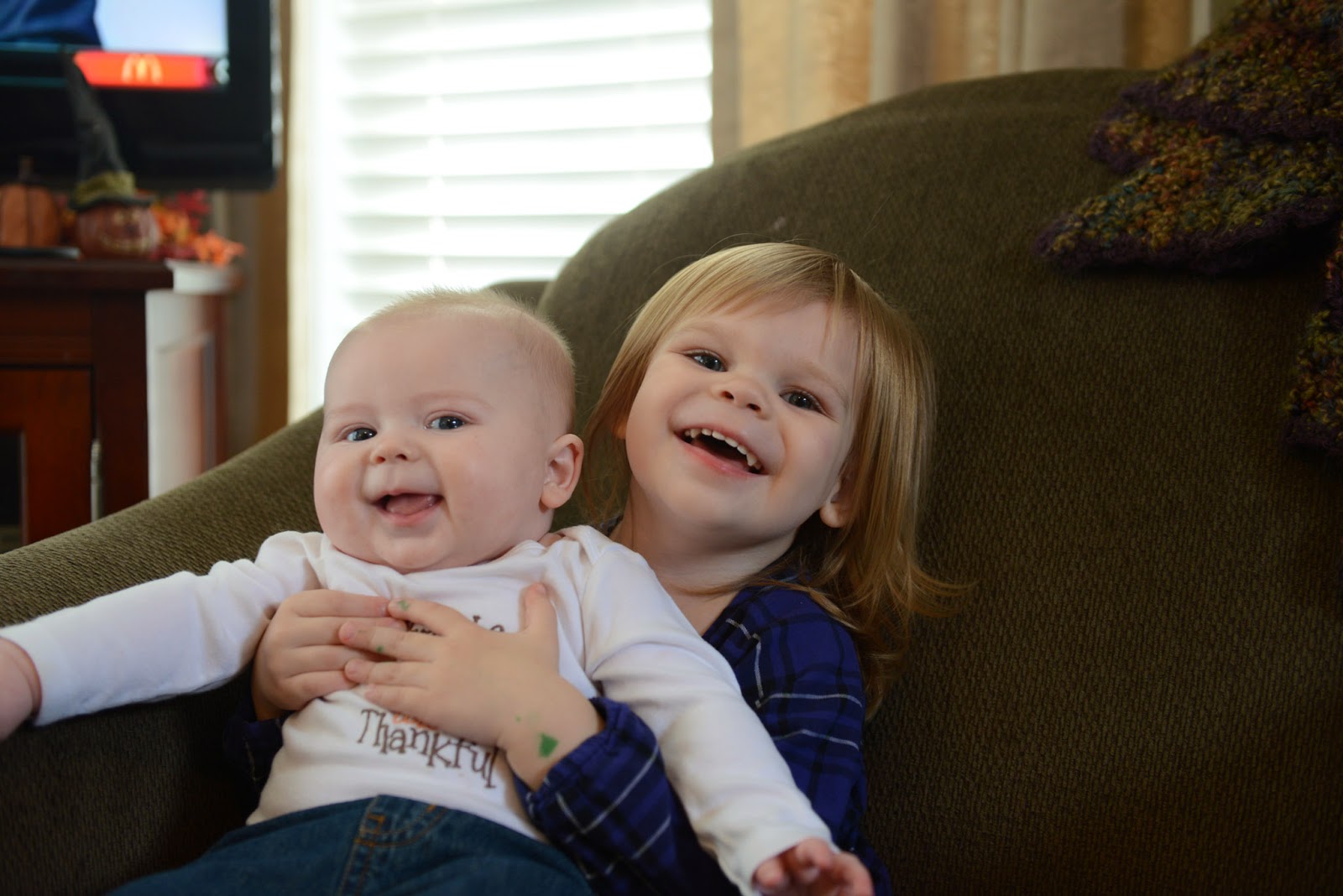 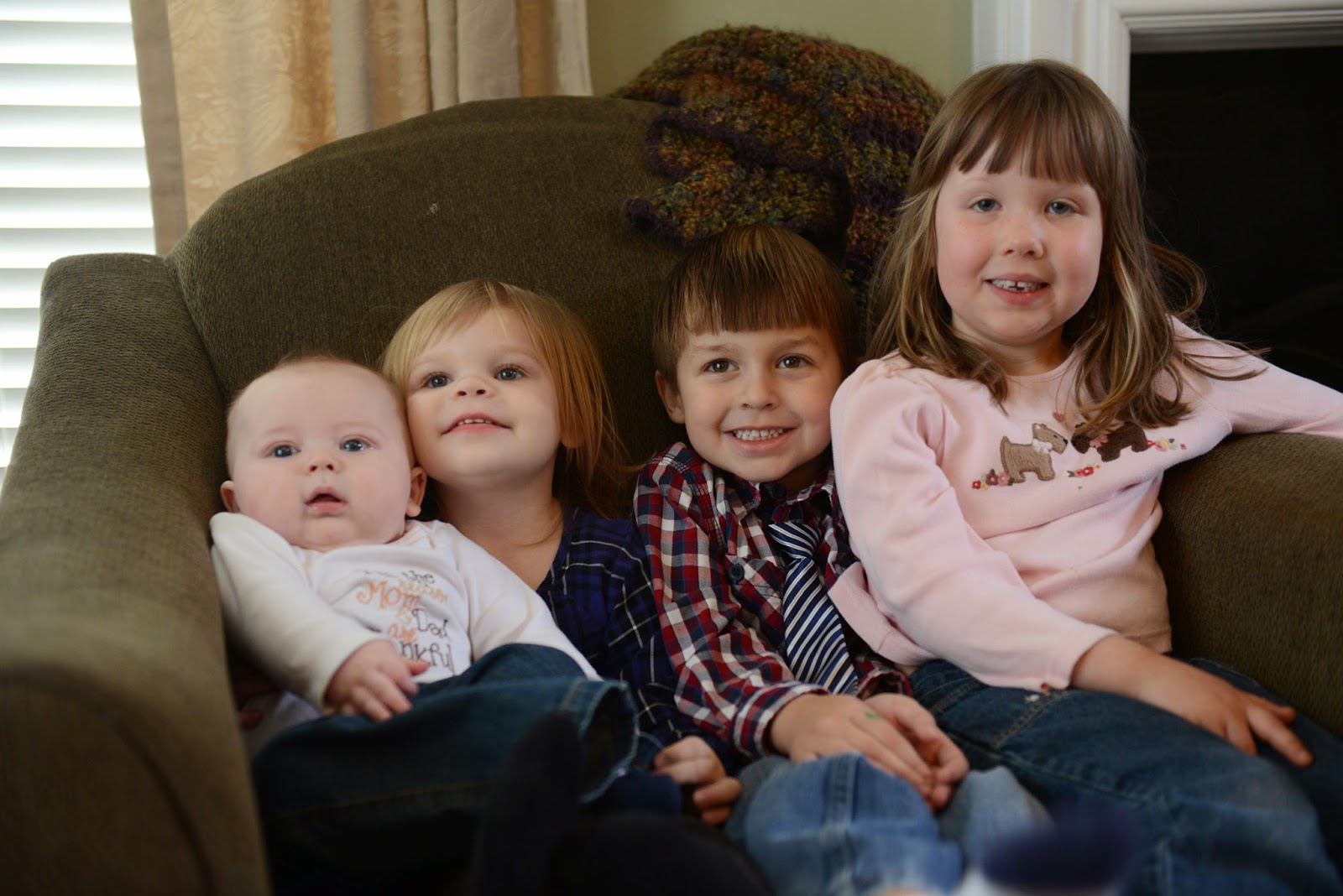 Just missing Easton.  I think he might have been napping.  I didn't plan on getting all the kids at this time, they just sort of piled in.  Then, once I looked back at them, I'm really sad that Easton isn't there. 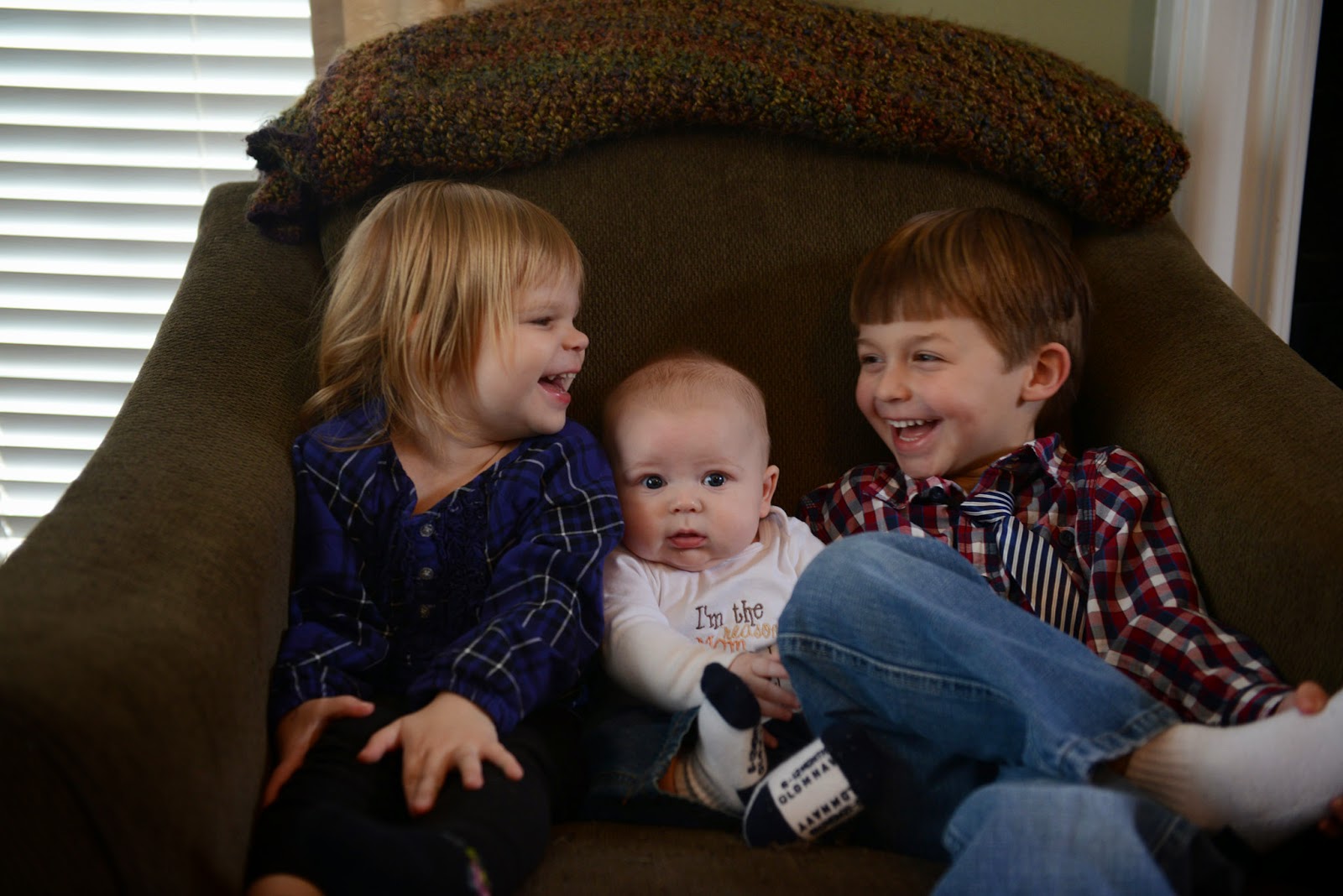 Oh these three!  They have my heart! 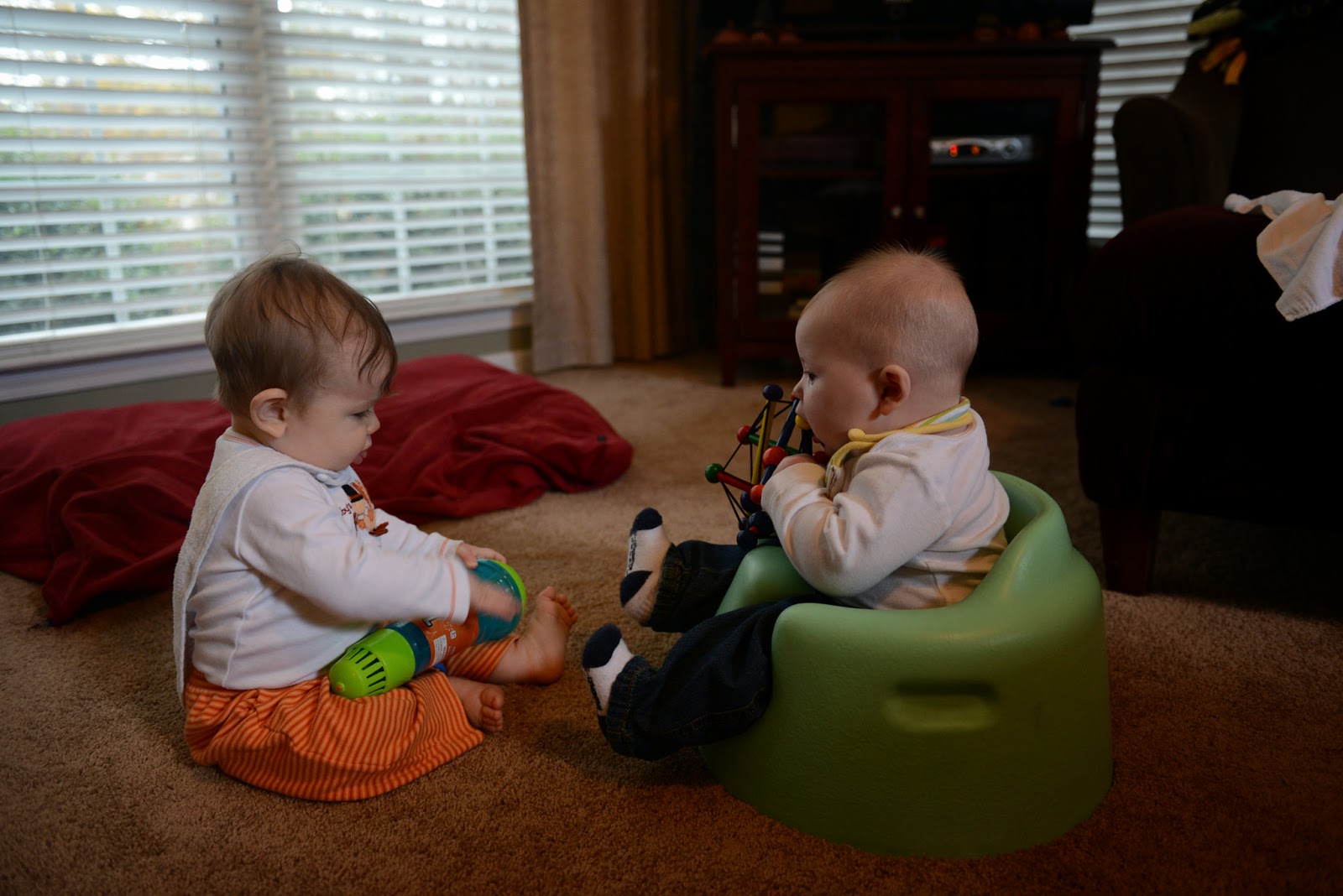 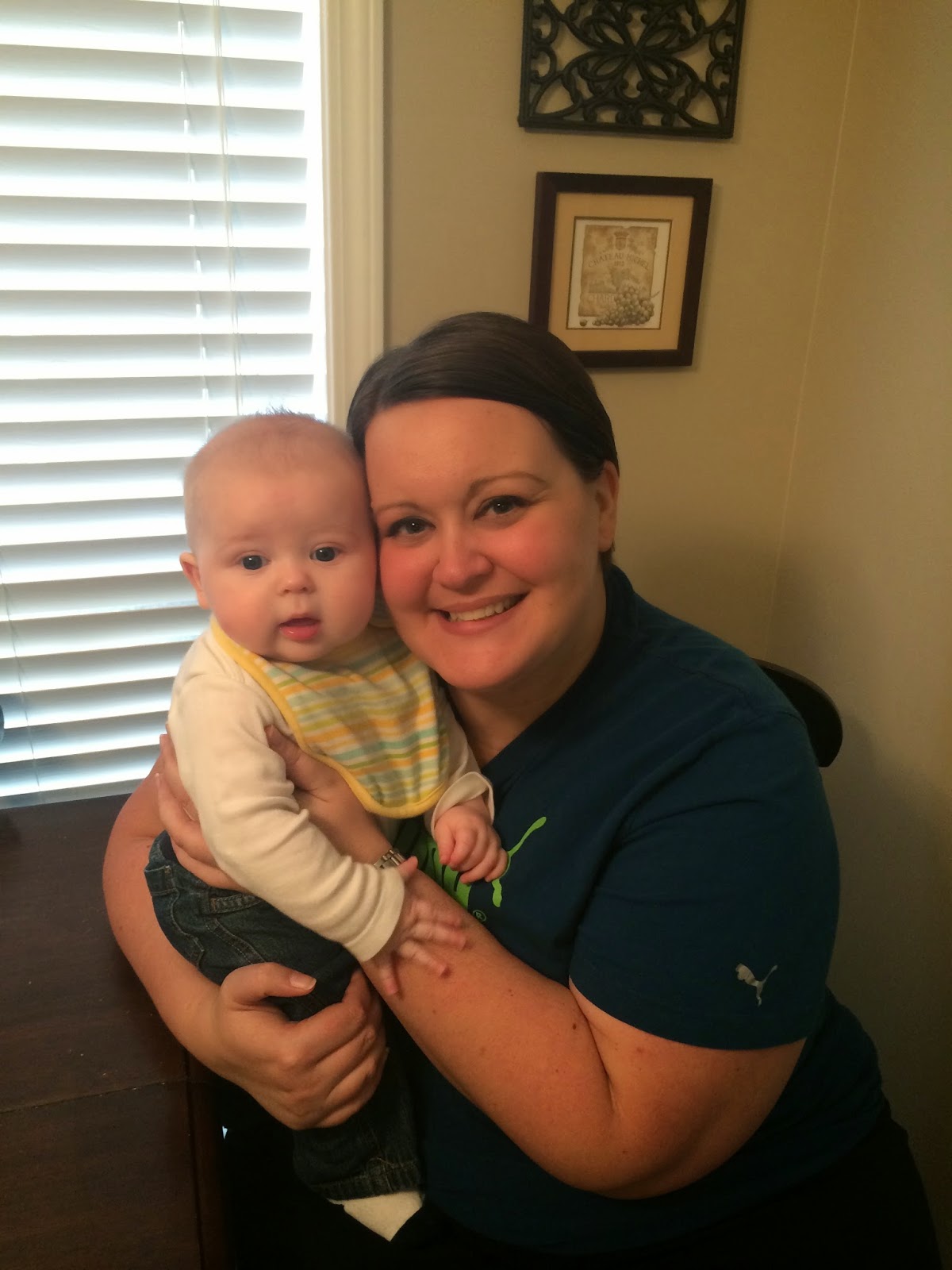 Jess, Jen, and I went out shopping once the stores opened up.  Here's my feelings about stores opening on Thanksgiving.  I feel like it's called Black Friday for a reason, and the stores should open on Friday, not Thursday.  I don't get into a big fuss because retailers shouldn't work on the holiday and blah, blah, blah because there are plenty of people who have to work on a holiday, such as medical staff, public safety, airlines, etc.  So, I'm not necessarily going to boycott shopping, but I do think it's a little unnecessary for the stores to open on Thursday. 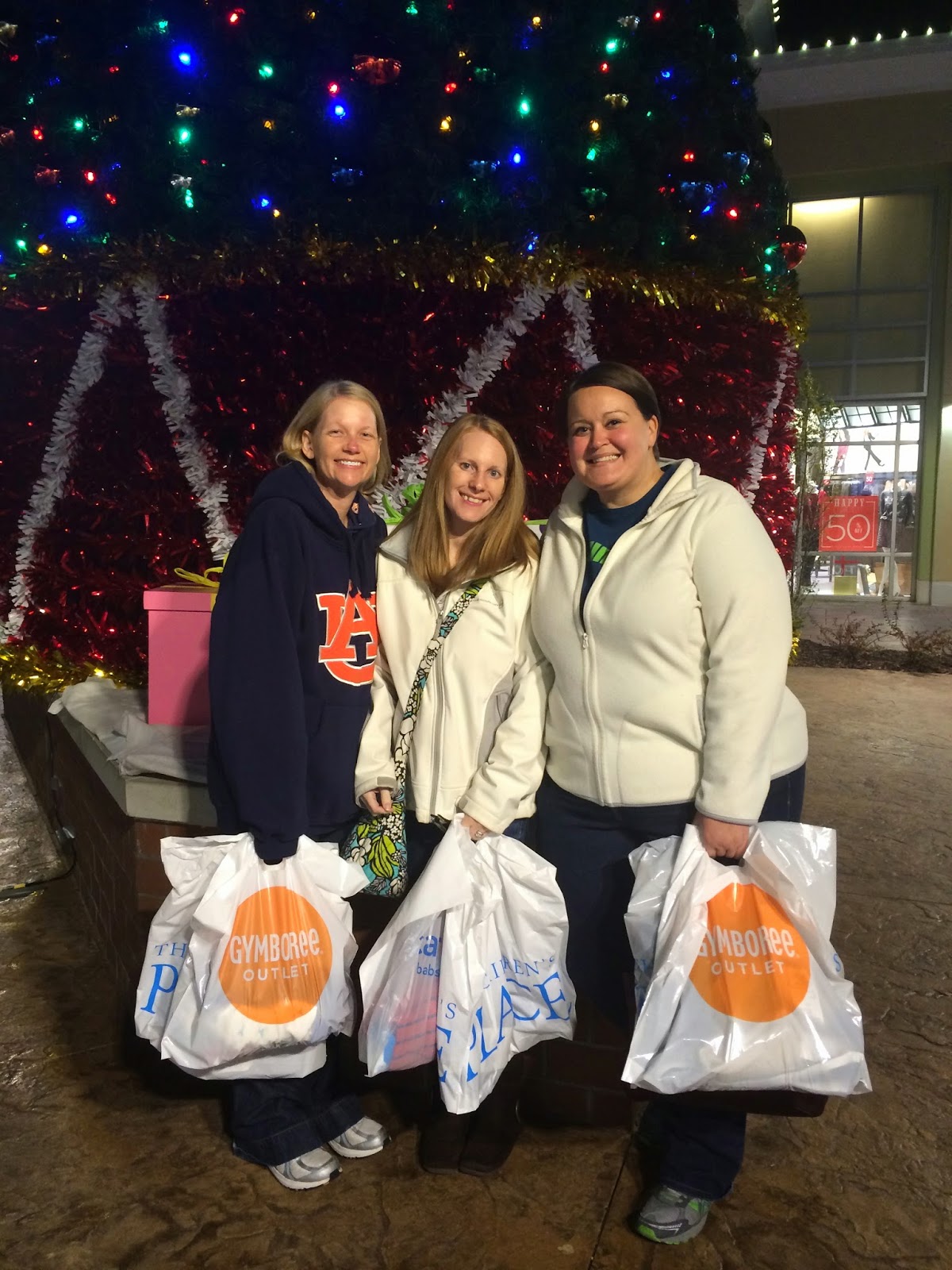 On Friday, the boys went shooting in the afternoon and us girls stayed home with the kids.  When they got up from their naps, we went over to the park for a little bit.  By that time, the guys were back home.  Jess and Jen went to see a movie, but I stayed back because I hadn't seen the second movie in the series that they were going to see.  I have a year to catch myself up so that I can join them next year! :)

Saturday, Drew and Jen and their family went to Christmas for her side of the family.  We said our goodbyes to them since we planned on leaving before they would be getting back.  We took the kids to a place called Catch Air to let them play and run off some energy.  Wes and Annelise had a blast! 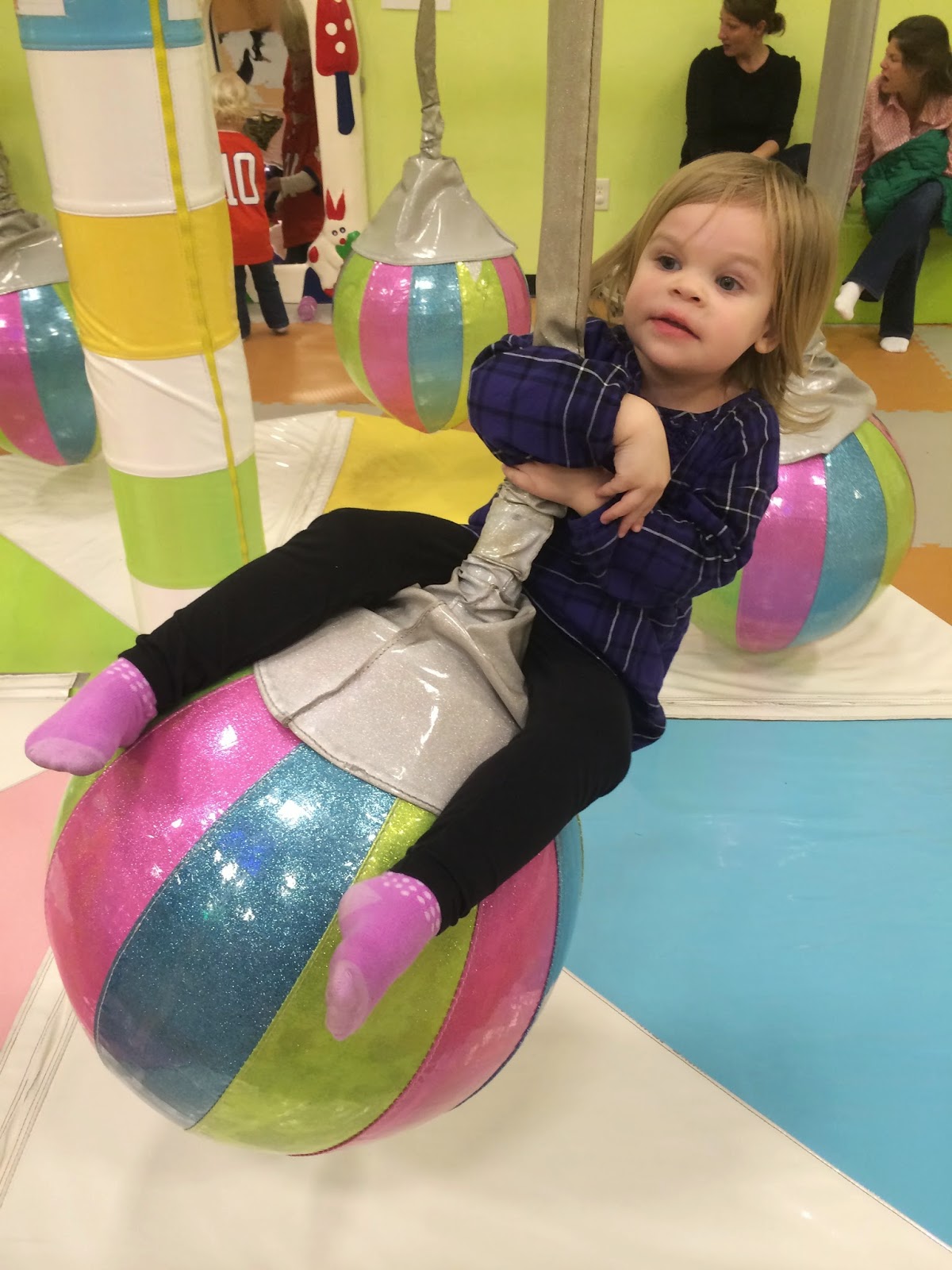 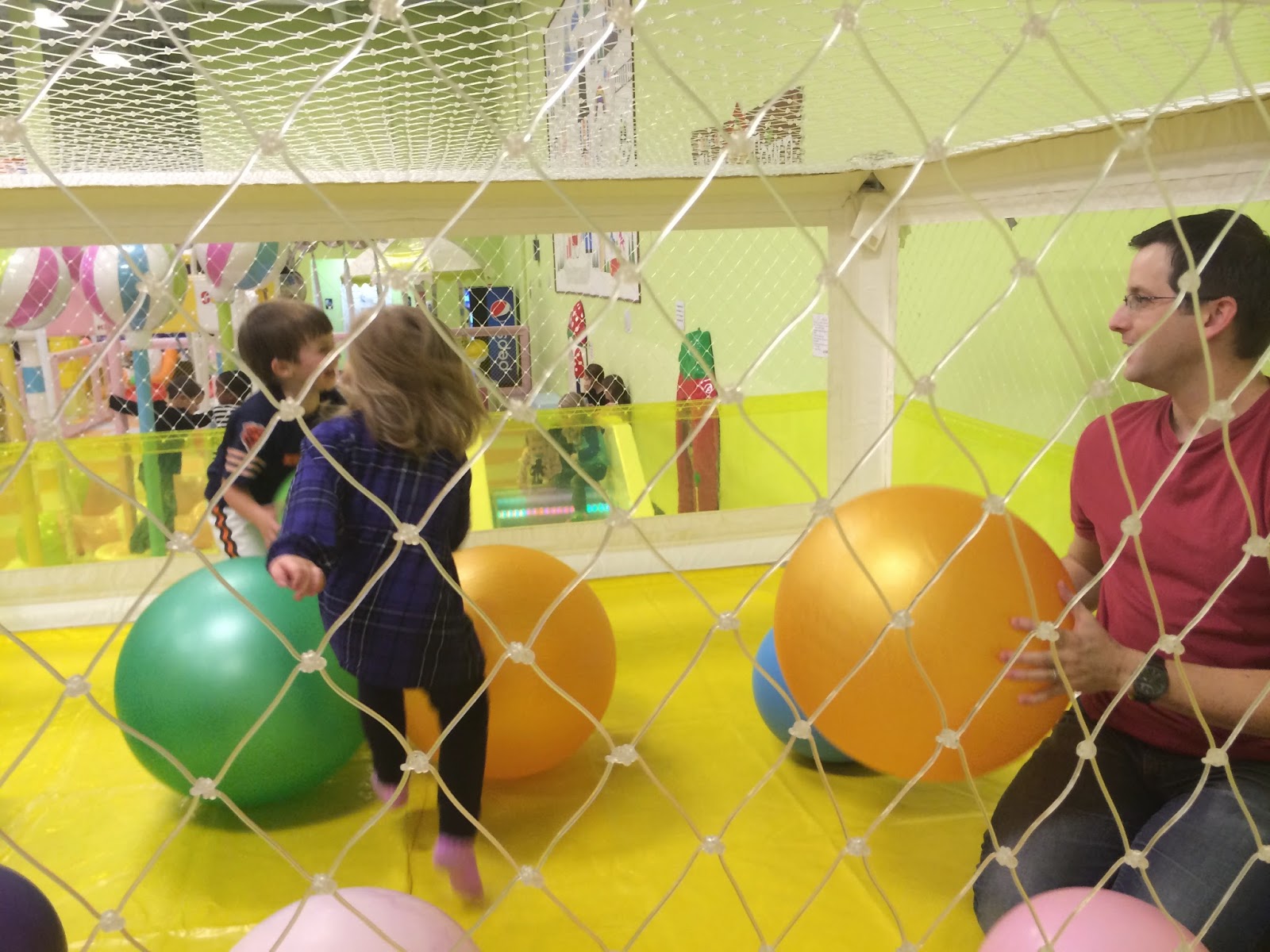 Once we got back to Jess and Eric's we packed up and loaded the car.  We left their house around 5:30 PM and drove overnight to get home.  I started out driving and made it about halfway before I had Drew take over.  He finished driving the rest of the way and we arrived home at exactly 5:00 AM.  The kids were fantastic and we only had to stop once for a feeding.

Overall, it was a fantastic trip and we all had a great time.  I just love being able to spend the holiday with family!