Today was a very exciting day for us!  This morning, my friend, Heather, and her daughter, Anya, came over to visit and play.  Heather and I met while we were both going through infertility treatments. Similarly, we both have snowbabies for daughters.  Heather and her family live in towards Chicago, but, we both did our IVF procedures at the same clinic.  (My doctor is located here in town, but we are sent into Chicago for the retrieval and transfer.)  Anya is 19 months, and Annelise just turned 16 months, so they are very close in age.

Anya and Annelise spent some time playing, and sharing some goldfish that Heather brought as a gift for Annelise.  After a little bit of playing, I thought I heard some bagpipes playing.  I went and looked out the window, and remembered that a parade would be going by.  Our little hick town had a corn boil today, and a parade always kicks off the festivities.  Before Annelise, I was either working, or just dragging my lazy butt out of bed.  Last year Annelise was still pretty young, so we didn't bother walking down to it.  Today though, I thought that both girls would love to see it.  And, it just so happened to be Anya's first parade too.

We quickly put some shoes on the girls and walked down to the end of the street.  The girls ran around in our neighbor's yard until the parade came by. 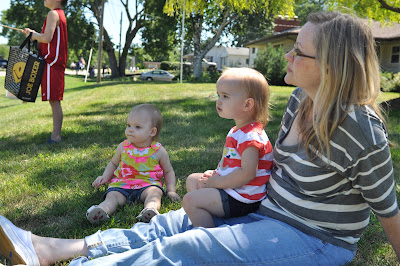 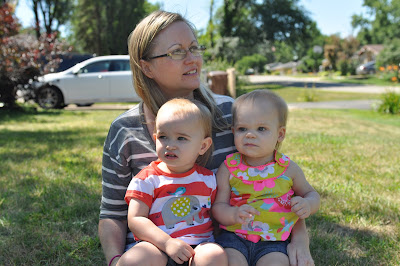 At first, everything was great and the girls really seemed to be enjoying it.  But then, the firetrucks came by and started blowing their horns. 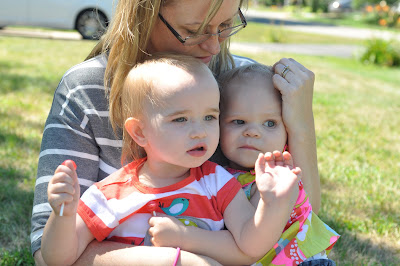 Poor little Annelise was terrified!  She turned and grabbed onto Heather and Anya as tight as she could and just held on!  Notice how she didn't let go of the sucker though.  Haha!

The parade was over roughly five minutes after it started.  Our little hick town really knows how to throw a party!  Heather and I took the girls back inside the house and sat them on the couch to get their picture together. 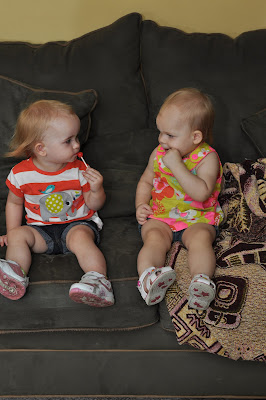 Of course, they had their suckers.  Don't they look like they are gossiping with each other?  I hope that they can be good friends as they grow older.

Heather and Anya left around noon because both girls needed a nap.  I put Annelise down right away.  Once she woke up, she ate lunch, and then we only had about two hours to waste until it was time to go pick up Drew from the bus station!  That's right, Drew came home today!!!

Annelise and I were waiting for him at the bus station when the bus arrived.  We had made a "welcome home" sign for him.  Once Drew had gotten his bag, he walked over and Annelise almost acted like she couldn't believe he was really home.  A guy who had seen us and the sign tapped Drew on the shoulder and told him that he was "quite a lucky man".  I agree!  We got everything loaded in the car and stopped at the corn boil on the way home for some dinner.

After we ate, we came back to the house and Drew had gotten us girls some gifts from Portland. 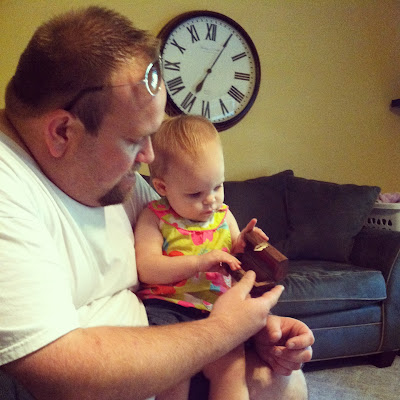 Drew got Annelise her very first jewelry box.  She kept looking at it and turning it all around.  I really think she liked it.  Drew got me a Pandora bracelet with a charm from Portland and a charm with Annelise's birthstone.  He said that he thinks it will be fun to add charms from places that we travel together.  How adorable of him to think of that!

We are all so glad to finally be back together again.