Well, we did it!  We're officially Texans!

Last week, we packed up our home, loaded everything into a truck, and moved our lives to Houston.  So surreal!

On Tuesday morning, Drew picked up the truck and we spent the rest of the day packing up the house and loading it into the truck.  We had to leave some things behind, like our bedroom furniture, the love seat, some toys, and other random miscellaneous stuff because it just wouldn't all fit into the truck.  I wasn't too sad because they were all things that could either be replaced, or needed to be replaced soon.

Very early Wednesday morning, Drew's mom, the kids, and I drove to the airport and flew down to Houston.  Drew, his dad, and my brother drove the truck and our van down, with the animals inside.  Drew picked up the keys on Monday, and was able to bring his stuff from his apartment over to the house.  So, we had air mattresses to sleep on and a few other things here.  The guys showed up here at about 3:30 AM Thursday morning.  Everyone quickly went to sleep!

A few hours later, the kids were up, cable and internet people started arriving, and Daughtry and Eric were landing.  The guys started unloading the truck around noon or so and had it all unpacked in record time.  I was shocked at how quickly they knocked it out.  Honestly, I think the heat had everything to do with it!  And I don't blame them one bit.  I didn't want to be out in it either.

Speaking of that, the heat here is insane!  My skin feels like it's going to melt off!  And it's hot from the time we get up in the morning.  It never seems to cool off.  It's going to take a little getting used to.

Everyone was gone by Sunday afternoon, and we've just been trying to settle in since.  We have lots of boxes to unpack, and furniture to arrange, but I'm so glad that the hard part of the move is over.

Here's the outside of the house: 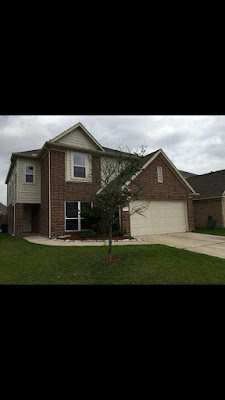 I'll take more pictures of the inside as we get things unpacked and arranged.

I'm so excited to call Texas home now.  This is going to be an exciting new adventure.